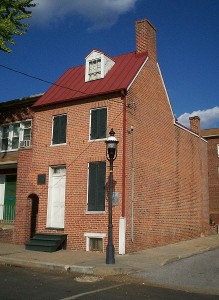 Located just eight blocks from where Edgar Allan Poe is buried at Westminster Hall and Burying Ground is, ironically, one of the many houses the author lived in over the course of his life. It was not, however, his home at the time he died in Baltimore in 1849 at the age of forty, as many people assume—possibly because of all the paranormal phenomena that have occurred at the site.

The author dwelled in this small, unassuming brick townhouse for just a couple of years, from March 1831 to October 1833, with his aunt, Maria Clemm, and her children, Henry and Virginia (whom he married in 1835, when she was thirteen and he was twenty-seven).

His stay there followed his discharge from the United States Military Academy at West Point and preceded his move to Richmond, Virginia, to work as a staff writer and critic for the Southern Literary Messenger, a periodical devoted largely to fiction, nonfiction, poetry, and reviews. While living in the Baltimore home, the author lived and wrote—possibly creating as many as a dozen published stories and poems—in a little top-floor room with a pitched ceiling.

In the early 1930s, the city of Baltimore planned to demolish the house as part of an urban clear-cutting campaign and to extend the almost tastelessly named “Poe Homes” housing project onto the site. The Edgar Allan Poe Society managed to obtain the property and opened it to the public in 1949.

Exhibits at the little museum include a lock of Poe’s hair; some china that once belonged to his guardian, John Allan; a reproduction of the portrait Poe painted of Virginia after she died in 1847;  a reprint of the 1849 obituary from the October 24, 1849 edition of the Philadelphia Dollar Newspaper; and Poe’s original announcement  about the creation of The Stylus, a literary magazine that never got off the ground.

Strange phenomena people have reported at the site include the sensation of someone tapping them on the shoulders, mysterious muttering voices, lights moving around in the house when no one was in it, inexplicable cold spots, windows flying open or slamming shut—and, in at least one case, a window falling out of its frame and smashing onto the floor.

Some people have, predictably, also claimed to see the ghost of Poe in this house—and perhaps part of his spirit does remain behind there residually, or visits periodically during its rounds to the many other sites where people have seen it. What even more people have claimed to see or otherwise sense, however, is a specter that many have described as a heavyset, middle-aged woman. Who she might be, however—and whether or not she has any connection to Poe—remains unclear, and further investigation would seem to be in order.

Copyrights: By Midnightdreary (Own work) [Public domain], via Wikimedia Commons