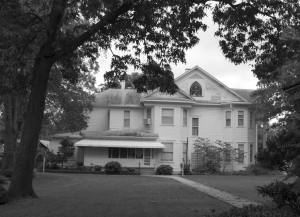 The colonial-style home was originally built in 1903 by Mr. Marcus Dewitt Carlock, Sr. He was a successful attorney who had been involved in many political ventures, and often entertained the politically elite of the time. The Carlock home was recorded as a Texas Historical Landmark in 1966; a marker bearing a brief history of the house is proudly displayed beside the front door.

Current owner Norma Wilkinson was born and raised in Winnsboro, and knew the Carlock family prior to purchasing the home in 1996. Norma and her husband live in the home, but have also opened it to guests as the Oaklea Mansion Bed & Breakfast.

Many visitors to the mansion and its grounds have reported strange experiences during their stay, and paranormal teams have also investigated the home, finding that legitimate activity was indeed occurring there.

The author of Ghosthunting Texas, April Slaughter visited the Oaklea Mansion with her husband and stayed in the “English Rose” room, which was richly decorated in floral décor and had access to the balcony. After a few hours’ sleep, April’s husband Allen was jolted awake by the feeling of a hand gripping his left ankle. He sat up in bed and saw no one there, but maintains that someone or something had touched him. He waited for awhile, but sleep ultimately found him again and the remainder of the night was uneventfully peaceful.

Norma treated April and Allen to an elegant breakfast the next morning while they discussed their experiences from the night before. April and Allen wholeheartedly believed that they were not the only guests of the Oaklea Mansion. It is a lovely mansion and no real surprise if a member of the Carlock family regularly comes back to check on the home they once owned

The Lone Star State is so vast it includes just about everything — including ghosts! For more haunted stories check out April Slaughter’s book Ghosthunting Texas.