The Miami River Inn is a cozy little jewel nestled on the Miami Canal just south of I-395 and west of I-95. And it is a real hideaway—nothing fancy but very comfortable, close to downtown Miami, the beach, and dozens of great restaurants. In former times, it was the destination of presidents, celebrities, and dignitaries. Henry Flagler even stayed at the hotel in the early 1900s. It is not only a hostelry of note, but it is also haunted. The inn was built in 1910 and has seen several makeovers. Reportedly, it was once a funeral parlor. Maybe that’s why it’s haunted. Or maybe not.

In one of the rooms, there seems to be a residual haunting that replays itself every day at 11 p.m., which is very inconvenient if you’re not a night owl. First, precisely at eleven, a door opens and slams shut, very loudly. Then what sounds like feet being wiped on a doormat can be heard. Next there is silence, followed by the sound of running feet—and it sounds like a person is coming right into Room 12. Then the door of the room rattles and the knob actually shakes, followed by the sounds of crashing lamps, vases, and pictures. In Room 12, it sounds as if someone is ransacking the room above. Then there are the sounds of more running feet, someone bounding up the stairs, and the door of the room above Room 12 opening and slamming shut again.

After a moment of silence, it sounds like the furniture upstairs begins to move around, scraping, bumping, thumping, smashing against the walls and the floor. The vibrations can be felt in Room 12. After an hour, it finally stops. Now, if you can, you’re free to go to sleep. Nothing will happen again until 11 p.m. tomorrow. If you’re a morning person and like to go to bed early, perhaps you shouldn’t stay in this room. On the other hand, if you’re not there for the nightlife, why are you in Miami?

A feud about the land gives rise to wicked laughter at the Witch’s Castle in Oregon. 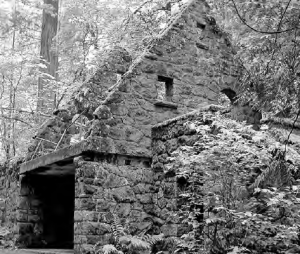 Folklore, legends, and ghost stories abound regarding the Witch’s Castle.
As with so many purportedly haunted locations in the Portland area, one must carefully sift through the lore in order to filter out the truths. Even then, it is sometimes difficult to paint a completely accurate portrait, and one is left with a dramatic narrative at best. But this is also what makes traveling to haunted locations so intriguing. Visitors are left to decide whether their own experiences and senses reflect paranormal activity. But what most ghost-hunting travelers do know is that they should expect the unexpected.

What is left is the eerie shell—roofless and covered with moss, clinging ivy, and graffiti. It has been called the Witch’s Castle for decades and has a reputation throughout the state of Oregon of being haunted. It is all that scary movies are made of—an odd, out-of-place structure; a bloody tale of former tenants; and the haunting of the land on which it resides.

One of the most accepted stories about the Witch’s Castle is that of an ongoing ghostly feud on the land that gives rise to wicked laughter, sinister whispers, screams of terror, and angry specters—phenomena that give many a hiker second thoughts about venturing down the trails after dark. Many have also claimed to see dark figures darting between the trees and behind the shrubbery and in and out of the old stone structure.

There have been reports of bright, glowing lights encircling the building before disappearing into the woods and even a few reports of full-bodied apparitions of young women and children. People I spoke with who have experienced what they feel is paranormal activity at the Witch’s Castle, however, do not stray from their accounts, and

I tend to believe them and that this consistency points to the spirits of the Balch family haunting their old homestead. I can assure you that, after dark, each noise, whether it is the falling of a leaf or the crack of a twig, is amplified around the Witch’s Castle. So whether the old stone building is haunted or not, it is not the most comfortable place to be when the sun goes down. I didn’t see a ghost during my visit, but that doesn’t mean they do not reside there—only that I was not in the right place at the right time. And, as we all know, history never dies.

If you enjoyed the story of the Witch’s Castle, check out Ghosthunting Oregon, a book by Donna Stewart in which she covers more than 30 haunted places throughout the Beaver State, all of them open to the public.