Ghosthunting San Antonio, Austin, and Texas Hill Country by Michael O. Varhola is the latest addition to the popular haunted travel guides series and will be in a book store near you as of September 15.

Clerisy Press is excited to celebrate this new addition to America’s Haunted Road Trip series with a GIVEAWAY, but first more about this new hands-on guide.

Local author Michael O. Varhola drew upon his training and experiences as a historian, journalist, and paranormal investigator while compiling this colorful and useful guide to publicly accessible haunted places in San Antonio, Austin, and Texas Hill Country. This guide fits every visitor’s needs with coverage of the paranormal, traveling the area, and Texas history.

Settled by Spanish explorers more than three centuries ago, San Antonio has a rich haunted history that includes conquistadores, the local Apache and Comanche Indian tribes, ancient monasteries, lost gold mines, battlefields, and elegant hotels. Ghosthunting San Antonio, Austin, and Texas Hill Country covers 30 haunted locations in or around the cities of San Antonio and Austin and throughout the region known as Texas Hill Country, collectively one of the most haunted places in the country. Each site includes a combination of history, haunted lore and phenomena, and practical visitation information. 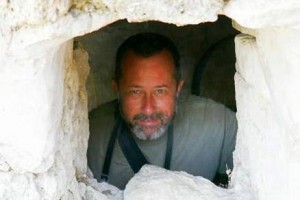 About the series: America’s Haunted Road Trip is a one-of-a-kind series of haunted travel guides. Each book profiles more than 30 haunted places open to the public. From inns and museums to cemeteries and theaters, the author visits each place interviewing people who live and work there. Also includes travel instructions, maps, and an appendix of 50 more places the reader can visit.

And now, as promised, the GIVEAWAY for a chance to win one copy of Ghosthunting San Antonio, Austin, and Texas Hill Country
a Rafflecopter giveaway

Michael O. Varholla shares with us thoughts about his favorite haunted trip project

Periodically, someone will ask me what my most- and least-favorite book projects have been, and the answer to both questions is the same: my latest one. That is, after all, what I have been most excited about and engaged with recently, and any exciting fieldwork I did for the latest book is the most memorable. It is also, however, what has inflicted the most recent physical and emotional stress, and other things have suffered because of my disproportionate use of time and other resources on it.

Of all the projects I have worked on for the America’s Haunted Road Trip series of travel guides, however, Ghosthunting San Antonio, Austin, and Texas Hill Country has definitely been my overall favorite for a variety of reasons.

One is my love for the American Southwest. Its unique, violent, and colorful history makes it a fun subject for research, writing, and road trips, as well as a likely locale for haunted places.

Another is the almost iconic distinctness of the places I selected for inclusion in this book, which include everything from wilderness areas that have existed for time immemorial to ancient missions, grand hotels, and great public buildings.

In addition, we changed the format of this book, so it’s even more useful to people using it as a guide on their own haunted road trips. Foremost among these improvements is a robust section of Additional Haunted Sites, which contains entries on 60 locations, effectively tripling the number of places covered in earlier AHRT books.

Suffice it to say, I hope that my love for the subject matter covered in this book and the effort I have put into it will make it a valued resource for readers, and make it one of their favorite volumes in the series as well.

About the author: Michael O. Varhola is a writer who has authored or coauthored 34 books and games — including the swords-and-sorcery novel Swords of Kos: Necropolis, and two fantasy writers guides. Michael is the editor-in-chief of d-Infinity game magazine, and editor of the America’s Haunted Road Trip series of ghosthunting travel guides. He lives in Hill Country, TX.

Ghosthunting San Antonio, Austin, and Texas Hill Country is the latest of Michael O. Varhola’s books. The guide covers 30 haunted locations in or around the cities of San Antonio and Austin and throughout the region known as Texas Hill Country, collectively one of the most haunted places in the country. Each site includes a combination of history, haunted lore and phenomena, and practical visitation information.

A blog by John Kachuba, based on the “Punderson State Park” chapter of his book Ghosthunting Ohio: On The Road Again

Punderson Lake is a deep, cold lake at Punderson State Park in Newbury, Ohio. Formed by glaciers eons ago, the lake is 72 feet deep although some people swear that it is bottomless. A source of summer recreation, the lake has been the scene of numerous drownings over the years, including that of a young woman who drowned in a boating accident in the 1970s.

For several years, a band of Romanian gypsies used to make Punderson State Park their home during the summer months. Led by a man named Peaches Frank, they arrived and set up their camp, living peacefully by the lake.

One evening, three old gypsy women were taking a stroll along the lake. One of them noticed a disturbance in the water and pointed it out to her companions. As the women watched, a figure slowly rose from the lake and started toward shore. As she drew closer, the women could see that the dripping wet figure was that of a teen-aged girl. Gypsy women, especially old gypsy women, recognize a ghost when they see one and they quickly identified the figure as a ghost. The women did not panic but as the spectral figure drew nearer, they ordered it to return to the cold depths of the lake from which it had emerged.

And the ghost did return to its watery grave. Peaches and his band of gypsies broke camp the next day and never returned to Punderson State Park.

The gypsies are gone but the ghost? Some people have seen the Blue Lady, as she has been named, floating above the dark waters of the lake, apparently still seeking her eternal rest.

Punderson State Park is also home to the Punderson Manor. The manor too is haunted. To read all about the Punderson Manor ghost and 26 other haunted places in the Buckeye State check out John Kachuba’s book Ghosthunting Ohio: On The Road Again

About the author: John Kachuba is the award-winning author of twelve books and numerous articles, short stories and poems. Among his awards are the Thurber Treat Prize for humor writing awarded by The Thurber House and First Place in the Dogwood Fiction Contest. John teaches Creative Writing at Ohio University, Antioch University Midwest and the Gotham Writers Workshop.

He is a member of the Historical Novel Society, the Horror Writers Association, and the American Library Association’s Authors for Libraries. John frequently speaks on paranormal and metaphysical topics and is a regular speaker at conferences, universities and libraries and on podcasts, radio and TV.

There are plenty of haunted cemeteries in and around Cincinnati, here are the ghost stories for three of them.

This creepy cemetery in the middle of nowhere is reputed to be one of the most haunted cemeteries in the southwestern part of Ohio. Through the years many strange stories have been told about this graveyard. Some of the more common and harmless ghost stories involve strange lights. People who visit at night will sometimes see what appears to be a light from a lantern bouncing along throughout the cemetery. Other reports simply involve a floating ball of light that weaves its way through the headstones.

Another somewhat harmless phenomenon involves voices that seem to come from all around the cemetery. These voices are so clear that the witnesses are certain there is someone else nearby. The strange thing, though, is that this place is so isolated there is almost no feasible way that someone could be way out in the middle of nowhere without a car. If anyone drove up, the car would be easy to see in the surrounding area.

Other stories about the cemetery are not quite so harmless. According to legend, if you visit this place at night, you will be plagued by bad luck. Another story says that if you leave your car and walk through the cemetery, when you return to your car there will be a surprise waiting for you inside. Unfortunately, anyone who has received this surprise refuses to reveal what it is, saying only that it startled them so much when they saw it that they almost ran their car off the road.

Millville Cemetery seems to be a hotbed of paranormal activity. Perhaps this activity is due to the clash between the spirits of the older graves and the new burials that happen every year. Perhaps the older spirits are concerned that they will be forgotten, so they make themselves known.

People will often see full apparitions in the cemetery. While the encounters most often happen at night, they have been known to happen at dawn or dusk or during cloudy or rainy days. Two apparitions are seen most often. The first one is an old man that people will see walking aimlessly around the cemetery. The old man will roam around for a while, seemingly looking for something and then will vanish. The second apparition is that of a young girl, who is seen standing near one of the trees near the front of the cemetery. She always stares out toward the field to the west of the cemetery. Visitors also talk of seeing strange balls of light that seem to float through the cemetery, and of feeling cold spots on warm days.

This cemetery is quite haunted. People will hear strange voices and sobbing coming from the grounds at night. When people walk through during the day or night, they feel that they are being followed or watched. Sometimes people will actually see ghostly figures, which vanish when they are approached.

Perhaps the spirits of all those unfortunate souls who are buried here are upset about the shabby condition of the cemetery or about having been buried in a potter’s field. The ghosts here always seem to give off an angry and menacing vibe.

Cemeteries are often haunted, as if the dead have a hard time leaving their physical bodies behind. Much of their world seems to consist of wandering aimlessly through cemeteries or repeating trivial gestures that they often did in life. While many of these actions may seem meaningless, we need to make sure that when the dead do have something important to say…we’re listening.