It seems that a number of people who have either lodged at or worked in this inn during its long history are still there in spirit. Andrew Lake, author of Ghosthunting Southern New England, tells us all about it.

Charlemont, Massachusetts, is a very popular year-round destination for outdoor enthusiasts. Situated on the historic Mohawk Trail in the Berkshires, the area offers many great locations for hiking, camping, white-water rafting, and skiing. A favorite spot in town to stay and to eat is the Charlemont Inn, which has been offering food and accommodations since 1787. Some of the notable figures who have stayed there include Mark Twain and President Calvin Coolidge.

Charlotte Dewey and Linda Shimandle are the co-owners of the inn. When Charlotte came into the business some 20 years ago, Linda, who had already been with the inn for some time, told her about the building’s haunted reputation. Linda informed Charlotte that one of their ghosts is a mischievous teenager, whom she and the staff have affectionately nicknamed “Elizabeth.”

Charlotte didn’t put too much stock into the idea of ghosts until one morning when she walked into the kitchen and saw a bag of potato chips floating in midair. Stunned by this scene, Charlotte stopped dead in her tracks and said, “Elizabeth, put those down!” The bag of chips dropped to the floor on her command as Charlotte retreated with haste from the kitchen.

A prank the teenage ghost likes to play is the mysterious removal of personal items belonging to both guests and the staff. Two objects that disappear with frequency are eyeglasses and hairdryers. What use these articles have for a ghost on the other side of the spiritual veil is yet to be understood.

The Charlemont Inn has been visited by many mediums and psychics over the years, and some of them have hit upon the paranormal activity in the building with amazing accuracy. Charlotte told me that she likes to keep most of the ghost stories quiet, so as not to influence people. About five years ago, a woman with psychic ability visited the inn and informed the owners that there was a ghost of a 14-year-old girl who died of tuberculosis haunting the building. She didn’t get the name Elizabeth. The name she got was Fidelia with the middle name Elvira. 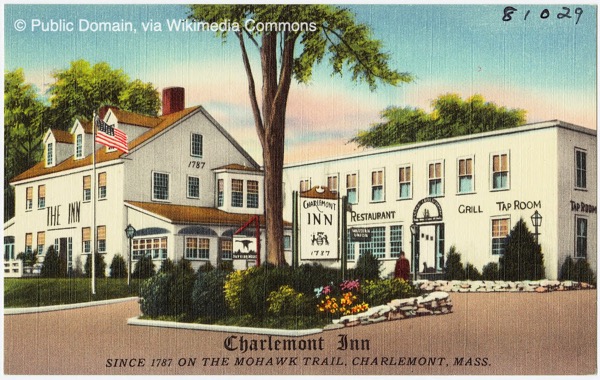 The psychic also received the girl’s last name. When a local woman volunteered to do research to see if there was any record of this girl, she found an exact match with the same age and cause of death. The woman was even able to locate the teenager’s grave. Charlotte explained to me that she had to withhold the girl’s last name from me out of respect for her descendants who still lived in the town of Charlemont. Further research showed that the Charlemont Inn was used during Fidelia’s time as a place for local patients to meet with the regional physician. It is possible that Fidelia died at the inn while waiting for medical care.

More than a couple of psychics who have visited the inn have sensed the spirits of a little boy and girl, with a cat, hanging around near the bottom of the main staircase by the front desk. No one has ever seen these little wraiths, but members of the staff have commented on feeling a presence on the stairs, and some have even heard a cat in the same vicinity.

An apparition of a Colonial soldier has been seen on the second floor, but not of late. The room this ghost haunts is now used for storage and is seldom opened. A ghosthunting group took photographs inside the storeroom and captured strange distortions that they believed to be evidence of a vortex or doorway into the spirit world.

One of the guestrooms on the second floor is also notorious for providing photographic anomalies. A guest once took a picture of this room and noticed there was an image of a tic-tac-toe game within the mirror. When the mirror was examined, no explanation could be found for it. Nothing was discovered on or behind the glass to account for the phantom marks.

A guest who stays regularly at the inn during hunting season had an experience in that same room that caused him to leave for the woods much earlier then usual. It was around four o’clock in the morning when Charlotte saw this man come down the stairs and head for the front door. She could see that he was badly shaken and immediately asked him why he was up and leaving so early. The man was ashen and couldn’t form a coherent sentence but said he would explain later. When the guest was finally able to talk to Charlotte about his rapid departure, he told her that he had been woken up by being pelted with little bars of guest soap. When he jumped up out of his bed, he could see no one responsible for the toiletry attack. The man then noticed there was a full-body impression on the mattress of the unused bed in the room. This was too much, especially since he had checked into the room alone. The hunter decided it would be a lot safer in the woods, so he headed for the hills as fast as his legs could take him.