With Halloween just around the corner, it’s time to stock up on some ghostly tales. Here are our suggestions for hair-rising reading.

Ghosthunting Colorado by Kailyn Lamb is home to ghostly hotels, city parks, and, of course, some of the best mountain viewing around.

The eyes of paranormal enthusiasts have long been on the Centennial State due to the fame that Stephen King’s The Shining brought to the Stanley Hotel in Estes Park. The Stanley, however, is not the only haunted hotel in Colorado. Multiple inns and hotels (some of them brothels) in Denver alone have histories as sites of deaths that make their victims decide to stay in their beloved rooms forever.

In Ghosthunting Ohio, author John B. Kachuba bravely visits more than 25 haunted places in Ohio to give readers firsthand frights from the safety of their armchairs. For readers curious―and courageous―enough to “hunt” on their own, maps and travel information are provided for every haunted location.

Ghosthunting Oregon takes readers along on a guided tour to some of the Beaver State’s most haunted historic locations. Local author Donna Stewart researched each location thoroughly before visiting, digging up clues for the paranormal aspect of each site. Stewart takes readers to some of the spookiest haunts across the state, including Oaks Park in Portland, where visitors have reported seeing a ghostly apparition of a child in a 1920s- or 1930s-style dress; the O’Kane Building in central Oregon, where people have reported seeing “ghostly smoke” and strange lights; and Pioneer Park in Pendleton, where some have reported seeing apparitions and hearing voices.

Settled by Spanish explorers more than three centuries ago, San Antonio has a rich haunted history. Ghosthunting San Antonio, Austin, and Texas Hill Country, by local author Michael O. Varhola, covers 30 haunted locations in and around the cities of San Antonio and Austin and throughout the region known as Texas Hill Country.

Ghosthunting Illinois takes readers ghost hunting in the land of Lincoln! Lock the doors, draw the curtains, and light a candle as you join author John B. Kachuba on a guided tour of Illinois’ most terrifyingly haunted places.

Mary Ann Winkowski is one of the inspirations behind the hit show “Ghost Whisperer.” Over the course of her work as a paranormal investigator, Winkowski’s reputation has spread. She was a consultant to the CBS hit television show Ghost Whisperer, has appeared on numerous TV and radio news programs, and has spoken at countless lectures.

As a special bonus, check out the Pumpkin Cookies recipe from The Ghost Whisperer’s Cookbook.

America’s Haunted Road Trip is a one-of-a-kind series of haunted travel guides. Each book profiles 30-100 haunted places that are open to the public. From inns and museums to cemeteries and theaters, the author visits each place, interviewing people who live and work there. Books also include travel instructions, maps, and an appendix of 50 more places the reader can visit.

With Halloween just around the corner, Clerisy Press is excited to offer a special on all

Simply visit our ClerisyPress.com and pick the ghost hunting books of your choice, then add them to your cart and make sure to enter the special coupon code GHOST15 before checkout to receive an extra 5% of per book on our already rock bottom prices. This is a total of 30% off the cover price for each book!

Prepare for Halloween with recipes from the dearly departed. Mary AnnWinkowski’s, the 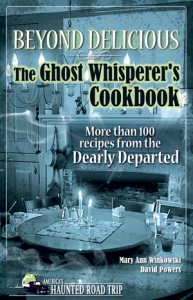 America’s Haunted Road Trip is a one-of-a-kind series of haunted travel guides. Each book profiles 30-100 haunted places open to the public. From inns and museums to cemeteries and theaters, the author visits each place, interviewing people who live and work there. Books also include travel instructions, maps, and an appendix of 50 more places the reader can visit.