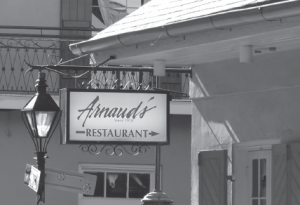 As you step off Bourbon Street and round the corner to Arnaud’s, you instantly feel as if you have stepped back in time and are preparing to dine like a real Creole. Founded in 1918, a French wine salesman named Arnaud Cazena built the restaurant.

A variety of private dining rooms, as well as a museum filled with New Orleans memorabilia on the second floor, are inside. The museum includes elaborate Mardi Gras costumes worn by Count Arnaud and his daughter, Germaine Wells, who reigned as queen over 22 Mardi Gras balls, more than any other woman in the history of Carnival.

There have been hundreds of paranormal sightings at the restaurant, including a ghostly gentleman standing near the beveled glass windows, who has been seen by employees. At first the tuxedo-clad man is noticed standing alone. When approached, he immediately disappears. Most believe that it is Count Arnaud checking in on the restaurant.

Others report seeing a woman wearing a hat exiting the ladies’ room and crossing the hall, where she then walks into the wall and disappears. There have been so many reports of this sighting that investigations were held to determine the original structure and layout of the building. It was discovered that this area once had a staircase where the wall is now placed. The ghostly woman is simply walking to the stairs from the time when she was here; in her world, there is no wall there to block her entry. Some believe this ghost to be Germaine, the daughter of Arnaud, who still enjoys the restaurant as well. She reportedly also appears in the museum by her costumes and has been seen in her ghostly form at various Carnival balls each year. 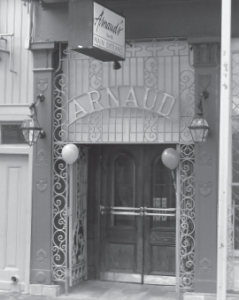 Beyond the supernatural sightings reported by local diners, tourists, and waitstaff, Arnaud’s reports that even its CPA experienced a ghostly visitation in the restaurant when he was alone one evening conducting inventory. While he was working, he  noticed a strong drop in temperature in the room. As he felt the cold chill overtake him, he became aware of a presence standing behind him. Turning around, he found himself alone in the room. The CPA was in the Richelieu Bar at the time, which is one of the oldest standing structures in the restaurant, dating back to the late 1700s. In a building still standing for several centuries, there is the opportunity for a wide variety of hauntings over its incarnations. Over the years, so many different ghosts have been seen and felt at the restaurant that not all of them have been identified by name.

When dining at Arnaud’s, try the Oysters Bienville with shrimp, mushrooms, herbs, and seasonings in a white wine sauce; it’s elegantly delicious!