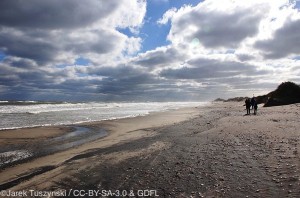 The Outer Banks of North Carolina are incredibly haunted. With so many shipwrecks and people lost at sea, ghostly images are often seen walking along the shore. While the shifting sandbars and unpredictable currents caused the majority of shipwrecks along the coast, many others were caused by pirate attacks at sea. The legend of Nags Head reveals an entirely new threat to sailors, what some might describe as the darker side of the mother of invention.

According to local legend, wannabe sea pirates (landlubbers by day) wickedly designed their own special style of pirating. They would gather their horses, hang lanterns around the horses’ necks, and walk the horses up and down the dunes at night, attempting to lure ships into the area. The lights hanging from the horses’ necks led the merchant ships off course, as it appeared that the lights were coming from ships close to the shore. As the ships changed course and headed toward the lights, they ran aground on sandbars. The “land pirates” would then storm the ships and steal the cargo. The legends state that the coastal area where this occurred was named “Nags Head,” due to the reputation gained by the land pirates’ fast footwork with the horses and the lanterns. Others claim that the town was named by English settlers from a similar area in the Isles of Scilly off the English coast.

Nags Head was a popular vacation destination for local plantation owners who lived farther inland in North Carolina and sought to escape the oppressive heat, humidity, and threat of malaria from mosquitoes in the summer months. A resort called the Nags Head Hotel was built in the 1850s; 20 years later, the hotel, located near Jockey’s Ridge, literally sank beneath the shifting sands. Local legends state that the hotel remains intact 100 feet below the sand. The area cottages of that period still stand and are referred to as the “Unpainted Aristocracy.”

Ghosts often appear all along the shore of Nags Head. Some say they are the crews of the ships plundered by the land pirates, and others say that they are former guests of the hotel, looking for it below the sand.

A third theory for the ghostly appearances states that many of the historic cottages in the area had porches built onto their homes using lumber salvaged from shipwrecks that washed in from the coast. The ghosts connected to the lumber from these ships now remain near the homes. They are attached to the timbers from their ships and are still looking for the rest of their ships to wash up on the shores, along with their lost treasures and belongings.

Regardless of which ghosts are roaming the area, a visit to the Outer Banks and Nags Head provides many haunting opportunities.

Enjoy Ghosthunting North Carolina, by Kala Ambrose, from the safety of your armchair, or hit the road using the maps, ghosthunting travel guide, and other resources. Buckle up and get ready for the spookiest ride of your life.