When writing a book on haunted locations in the state of Colorado, the Stanley Hotel simply cannot be overlooked. It was ranked as one of the most-haunted buildings in the United States by Denver’s KUSA/9News in September 2014 and is widely regarded as the most haunted place in Colorado. The hotel does not shy away from its haunted reputation and, in fact, thrives under the idea. Guests can even participate in haunted tours of the building and grounds with a guide named Scary Mary. The hotel is also host to  numerous horror film festivals throughout the year. 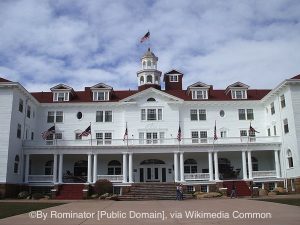 Another story that makes the hotel so popular involves Stephen King’s The Shining. King was inspired to write this popular novel, which was published in 1977, after staying in the hotel. Later, in 1980, Stanley Kubrick was so enthralled by the novel that he made it into the popular movie of the same title. It is regarded as one of the best horror movies of all time, and the Stanley Hotel plays the film on loop, 24 hours a day, on channel 42. This movie, however, was not filmed on location at the Stanley Hotel because of a lack of necessary lighting and power, according to Kubrick. Supposedly King did not like Kubrick’s film and felt that it ignored many of the themes in his book. According to tours at the hotel, King supervised a made-for-TV version of The Shining that was shot at the Stanley and aired in 1997. One of the more noticeable differences between the book and the movie is the giant hedge/maze. King’s version had giant hedge animals that moved and taunted characters, while Kubrick’s movie had an eerie maze.

In 2009, the hotel celebrated 100 years of wowing the nation as a successful haunted hotel. No one is sure when the haunts in question began. Several different apparitions and instances of paranormal activity have been reported throughout the building, especially in the lobby. The ghost of Stanley himself, as one might expect, has ostensibly been seen throughout the building. Additionally, his wife, Flora, who was a professional pianist, is thought to be the unseen player that tickles the keys later at night in the Music Room (although some report that it is not Flora but her husband who plays the ghostly tunes).

The fourth floor of the hotel is another location where paranormal activity is often reported. Dunraven, the wealthy man from whom Stanley bought the land, is reportedly seen in room 407, accompanied by the smell of his tobacco pipe. It is strange that Dunraven’s ghost should appear here, however, as he never stayed in the hotel and had left the country before it was even built. The lights also seem to have a mind of their own in the room, and there have been reports of a ghostly face looking out the window when the room is not occupied. According to an online video tour of the hotel led by Scary Mary, the fourth floor was originally a cavernous attic and was one of the few locations where children were permitted. People have said they can hear the sound of children laughing and running through the halls, especially in room 418. Some have reported the sound of bouncing balls, and others still have reported the feeling of being tucked in at night, a duty given to the children’s nannies. There is a closet that notoriously opens and closes on its own in room 401, and in room 428 people report hearing footsteps on the roof and their furniture being moved around. There is also said to be a friendly ghost called the Cowboy in that room, whose apparition tends to stand near one of the corners of the foot of the bed.

Photos taken of the hotel have been known to depict orbs or even ghostly silhouettes. One area of the hotel, a stairwell, creates a sort of vortex of activity in images, and photos of that area often show greenish orbs. Sometimes, the more human-shaped ghosts that appear in photos are seen in rooms or areas where guests are not allowed or are not staying in at the time.

Stanley Hotel Not Shy About its Reputation 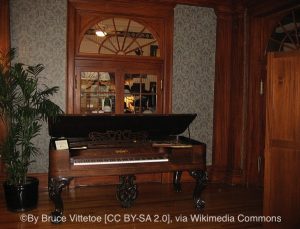 The hotel does not shy away from its reputation as the most haunted hotel in Colorado. As a matter of fact, in addition to daily historical tours, the hotel also gives daily haunted tours. Its website lists several tour packages, including a historical/paranormal combo tour, a nighttime ghost tour, and a five-hour ghosthunt through the most haunted areas of the hotel. All of the tours require advance booking and have separate costs. According to one article, the Stanley earns more than $1 million on tours alone. It also has a “haunted photo gallery” that includes spoof ghost photos of different locations in the hotel. Its online store includes items that pay homage to The Shining with oozing, bloodlike lettering spelling out “REDRUM.” There is even an annual horror film festival there, dubbed the Stanley Film Festival, that was founded in 2013.

Much of the hotel’s fame is due to the success of King’s book and Kubrick’s film. Are the ghosts just there to play along, or is the Stanley Hotel really as haunted as they say? The best way to find out is to visit it yourself.