Spirits Are Helping Out Author

John Kachuba shares with us his story about the ghost at Taffy’s Main Street Coffee in Eaton.

Sometimes, while I was working on Ghosthunting Ohio, I wondered if maybe the spirits were helping me out; real ghostwriters, as it were. The story of Taffy’s Main Street Coffee in Eaton is an example of what I mean. 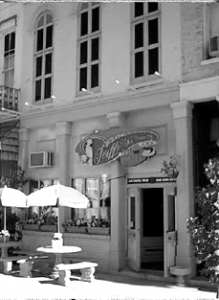 My wife, Mary, and I had been in Eaton in the spring to investigate Fort St. Clair, a historic site said to be haunted by the ghosts of several Kentucky militiamen killed there by Miami Indians in 1792. After visiting the battlefield site, we drove back through downtown Eaton and spotted the colorful umbrellas shading the tables on the sidewalk outside Taffy’s. The shop had an interesting Victorian feel to it, so we stopped in.

It was a Sunday afternoon and we were the only customers. I chatted with the server and told her why we were in town. She was interested in the project and, as I left, I gave her one of my business cards, Ghosthunting Ohio printed prominently across it. We drove back to Athens and forgot all about Taffy’s.

Three weeks later a woman identifying herself as Nancy Peters, owner of Taffy’s, left a message for me on my answering machine. She had found my card by the cash register when she was cleaning and assumed I wanted to talk to her about the ghost at Taffy’s!

Of course, I would have wanted to talk with her had I known there was a ghost there (okay, I can’t always find them), so I called her back. Nancy was excited to have someone to talk to about her story. “I would never have believed such a thing could happen to me,” she said. She told me that she and her husband, Tony, bought the old  Victorian building that now serves as both Taffy’s and their home in 1992, although they did not open the coffee shop until 1999.

The part of the building that is now the coffee shop was formerly a jewelry store. You can still see the place where the jeweler’s heavy safe crashed through the floor when Nancy and Tony started their renovations. The owner of the jewelry store had died under “unusual circumstances,” and his body was discovered on the floor behind the jewelry counter.

Before they opened Taffy’s the old store was part of the Peterses’ home, and it was in that section that the hauntings occurred. While both Nancy and Tony experienced the same events, they  never experienced them together. Strange things would happen only when one or the other was alone in the house.

One day while Nancy was upstairs, she heard the sounds of her stepson’s electric guitar. “I knew I was alone in the house, so that really scared me, hearing this loud guitar strumming. I went downstairs, but there was no one there. Worse, the guitar wasn’t even plugged in. It couldn’t have played, but it did,” Nancy said. “That was pretty scary, but nothing like the voice that came out from the wall.”

Nancy said that a voice she clearly identified as being that of a male came from high up on the wall and called, “Max!” the name of her dog. “It scared the dog a lot,” she said. “There was no one there and yet there was this voice calling him. It was kind of a gravelly voice, definitely a man’s voice, maybe an old man.”

Tony also heard the voice, but at a different time. “It was about this time that I thought maybe I should get the house blessed. I have a friend who is a Catholic priest and I thought about asking him to do it.”
“Did you go through with it?” I asked.
“No. Instead, I started talking to the ghost for a few days, telling it that it was scaring me and my family and asking it to please move on.”

It Takes Courage to Talk to a Ghost

It takes some courage to talk to a ghost and try to make your peace with it, so that you and your resident ghost can “live” together in harmony, but professional ghostbusters will tell you that the idea of living in harmony with a ghost is not a good one. A ghost, they say, needs to move on, whether it is a good ghost or a bad ghost. It simply no longer belongs on earth and needs to find its way to its own realm.

Nancy doesn’t feel that the ghost is threatening in any way and, in fact, the activity at Ta=y’s has quieted down. “But you still feel a sadness in your heart, like something’s still hanging around,” she said.

Nancy told me that the owner of another old building nearby was also experiencing similar phenomena, and she wondered aloud if perhaps they could be connected—maybe the same ghost visiting both places. I didn’t know for sure, but I thought it was possible. Just think of how many places Elvis has been spotted in.

Ghosts are often stirred up when the places they used to know in life are altered or renovated. Such activity seems to make them nervous (assuming ghosts can be nervous) and anxious. Some researchers say that the resulting paranormal activity is the ghost’s way of showing its displeasure with the changes in its familiar environment. Maybe this is what was going on at Taffy’s.

Even though things are not as frightening at Taffy’s as they were before, Nancy said that, “Without a doubt, his spirit is still around. It has been a life-changing experience for me, because it was real.”

Who knows if the ghost will make itself known again? Since the Peterses decided not to contact the priest after all, it may only be a matter of time before voices are speaking from the walls again.