Is the Whitney in Detroit Haunted?
Helen Pattskyn, author of Ghosthunting Michigan seems to think so.  Here is her tale. 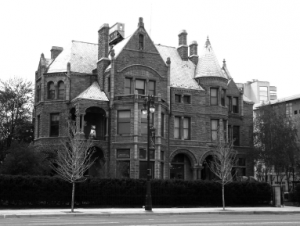 I’ve only been there to eat on a couple of very special occasions, but I fell immediately in love with the grand old house. Of course, prior to my visit on a bright sunny afternoon in April, I had only gone in looking for after-theater drinks and dessert with friends, not hoping for a glimpse of the ghost of former owner David Whitney Jr.

There are 20 fireplaces throughout the house, a secret vault hidden in the original dining room, and an elevator. A haunted elevator, according to stories. In addition to the beautiful dining rooms on the main floor, there are outdoor gardens that host parties all summer long and the Ghost Bar up on the third floor.

When I spoke to David, one of the many wonderful staff members, I asked him if he had ever had any unusual experiences while working there—or if maybe any of his coworkers had seen or heard anything out of the ordinary.

“We have a lot of the usual stuff, I guess,” he told me. “Doors sometimes shut as if by themselves. And one woman who used to work here told me that she was walking through the Great Hall when one of the crystals, from one of the chandeliers, fell right at her feet and shattered. It kind of freaked her out a bit. Of course, that might not have had anything to do with anything supernatural,” he cautioned. “And if you knew her . . . she’s a bit of a spirit herself,” he added with a chuckle. 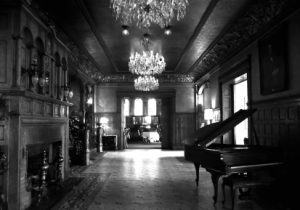 One of the most haunted places in the building is said to be the elevator, especially where it opens up onto the second floor. Not only did David Whitney Jr. pass away in the house, but his wife, Sara, also died there. Numerous employees have reported that the elevator will start moving on its own and that the doors open and close without anyone pushing the button.

I meandered up the stairs to the third floor to visit the aptly named Ghost Bar. The bar wasn’t open yet, but the bartender was setting up. He gave me a friendly “hello” and asked how I was doing.

“I’m doing great, thanks,” I answered. Then I told him that I was writing a book about haunted places and that, naturally, the Whitney had come up.

The bartender smiled. “As long as you remember that everything I tell you is hearsay—that nothing’s official—I’ve got a couple of stories for you, if you have a second and are interested.”

He told me that the first incident had occurred during a wedding in which the entire mansion had been rented out. “The way they run it is pre-dinner drinks are up here, then they serve dinner downstairs, and then we reopen the bar for post-dinner drinks,” he told me. “There weren’t very many children at this wedding, but there was this one little girl. She was maybe five or six and she kept running around and she didn’t want to sit still. Her mom asked me if I’d mind keeping an eye on her for a few minutes, so she could go down and get something to eat. Everyone else had gone downstairs by then, and I really didn’t mind, so I said ‘sure’ and let the mom go downstairs. I left the little girl alone in this room, and I went into that room over there,” he pointed to one of the sitting rooms adjacent to the bar. 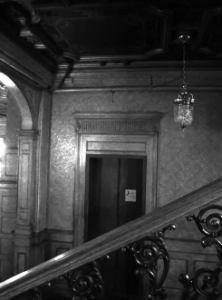 “I was in there cleaning up, and, all of the sudden, I heard this shriek, so I came running out to see what had happened. The little girl had this look on her face, like she was totally terrified. I didn’t see anyone—or anything—so I asked her what was wrong. She told me that a big ball of light had flown out of one corner of the room and came right at her. And she was really frightened,” he emphasized.

The bartender went on to tell me about another incident that happened about a month after that wedding reception, this time with a little boy who came upstairs with his mother. “He was right about the same age, too, I think. I didn’t pay too much attention to them; they were just looking around. Then all of the sudden, I see this little boy dart out of that room and into the other room. I probably still wouldn’t have thought too much of it, except I overheard him telling his mother, ‘Mommy, Mommy, there it goes!’ A few seconds later, the mother came over to me and said that she was so sorry, but her son kept insisting he was being chased around by a ball of light.” 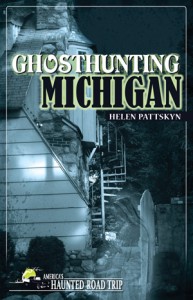 The third incident involved an adult, a guy who had been sitting at the bar having a drink. “He was about my age,” said the bartender, which would probably have made his customer somewhere in his mid-20s. “And he was talking on his cell phone, making plans to meet up with his buddies somewhere downtown. I turned away to take care of another customer. The next thing I knew this guy had jumped up out of his seat and was standing way over there, looking really freaked out. I asked him if he was okay, and he insisted that, yeah, he was fine. ‘Are you sure?’ I asked a second time. He looked pretty shaken up and I thought—I don’t know, maybe he’d seen a mouse or something. This is an old building. ‘No, I’m good, bro,’ he told me. But he didn’t sit back down. Instead, he told me he was ready to cash out.”

The bartender said that as his customer was settling up his tab, he’d finally calmed down enough to admit that he’d seen the silhouette of a man standing behind him in the mirror behind the bar—but when he turned around, nobody was there.

Enjoy Ghosthunting Michigan from the safety of your armchair, or hit the road using the maps, “Haunted Places” travel guide, and “Ghostly Resources.” Buckle up and get ready for the spookiest ride of your life.