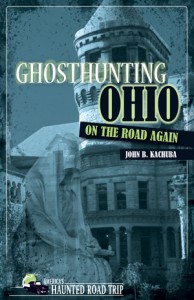 If you are thinking of taking a tour of haunted Ohio hotels you will  not be disappointed.  Ohio has plenty of ghostly dwellings to pick from. Here’s is Part II of some of the spookiest from Ghosthunting Ohio – On the Road Again a book by John B. Kachuba:

The Old Stone House Bed & Breakfast -Marblehead
This bed-and-breakfast is supposedly haunted by the ghost of a little girl who fell out of a window and flew three floors to her death. Guests claim to hear flushing toilets on the third floor, and some have reported photographing orbs in haunted Room 11

Rider’s Inn – Painesville
The Rider’s Inn was built in 1812 and has seen its share of travelers pass through. Suzanne Rider was the original landlady of the establishment, and apparently she has found it difficult to leave. At least one modern guest has reported a silent lady who looks like Suzanne admitting the guests to the inn late at night.

Granville Inn – Granville
Right across the street from the haunted Buxton Inn—which has, among other ghosts, a ghost cat—the Granville Inn has its share of spooky visitors. Cold spots, odd tapping noises, and a piece of glass that floated from a hanging lamp to the floor are just some of the paranormal pranks reported here.

Candlewood Suites – North Olmstead
The land upon which the hotel was built was formerly woodlands. The story behind the haunting says that a woman hanged herself in the woods and that her body was later discovered by construction workers. There are reports of cold spots in the hotel, and some employees say they have been touched by the ghost.

The Inn at Cedar Falls – Logan
The Inn, located in the scenic Hocking Hills area of southeastern Ohio, has several cabins and a main house that incorporates an original 1840 log cabin. Unsettling, eerie guitar music was first heard as the cabin was undergoing renovation in 1987 to become part of the inn. Beneath the birdsong you might hear Guitar Man still playing his haunting tunes.

Westgate Hotel – Sylvania
Maids working on the fourth floor of the hotel often see the apparition of a woman in old-time clothing; they call her “Isabella.” The maids think she may be the ghost of Olive Ward, a local woman murdered by her husband in 1857. They also hear their names being called by unseen persons.

Missed Part I of our Haunted Ohio Hotels? You can find them HERE