Helen Pattskyn, author of Ghosthunting Michigan, shares with us the tale of Michigan’s
Ada Witch.

The Ada Witch is perhaps one of western Michigan’s most famous ghosts. It is unclear how the title “witch” got attached to her name—or even what her true name might be—but that’s what locals call the adulterous specter who is believed to haunt Findlay Cemetery and Honeycreek Road in Ada Township. Ada is a small community, located a little more than 10 miles east of Grand Rapids and first settled in 1821. It was in those early years that many believe the so-called “witch” met her tragic end, an end she may have brought upon herself.

One website dedicated exclusively to the legend of the Ada Witch claims that she died in the year 1868. It is impossible to verify that date, however, as neither the woman’s name nor the actual whereabouts of her grave are known for certain. We can only speculate.

The story says that the woman known as the Ada Witch was having an extramarital affair and would meet secretly with her lover in the marshes outside of town, near what is now Honeycreek Road. When her husband became suspicious of her late-night comings and goings, he followed her and caught her in the arms of her lover. In a jealous rage, the husband murdered first his wife and then the other man. During the struggle with his wife’s lover, the husband was also fatally wounded and died a short while later. Perhaps that’s why some people report not only seeing a mysterious ghostly woman wandering the area, but also a pair of ghostly men—maybe the men are the Ada Witch’s husband and her lover.

The woman is believed to be buried in Findlay Cemetery, but nothing is noted in the stories about where either of the two men might have been interred. Although no one can prove that the gravestone is hers, locals believe that a broken old headstone near the back of Findlay Cemetery is that of the legendary Ada Witch. Visitors often light candles or leave trinkets for her there. 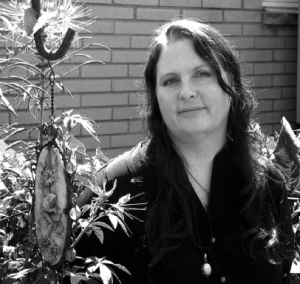 Several paranormal investigators have been to the cemetery and believe that it is indeed haunted. There is evidence in the form of orb photos and other unusual phenomena that have been caught on film and on digital cameras. Of course, just as there are many people who believe the story is true, there are just as many who think the Ada Witch is little more than an urban legend.

In her book Ghosthunting Michigan, author Helen Pattskyn explores 30 of the scariest spots in the Wolverine State, all of which are open to the public—so you can test your own ghosthunting skills, if you dare.