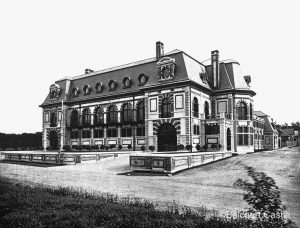 Belcourt Castle was built between 1891 and 1894 for Oliver Hazard Perry Belmont as a summer home. It was designed by Richard Morris Hunt, who used Louis XIII’s hunting lodge at Versailles as the model. Belmont’s wife, Alva Vanderbilt, added to the original structure with examples of English, Italian, and German architecture. From 1933 to 1955, Belcourt (as it was originally called) passed through several owners and saw more neglect than restoration. The property was purchased in 1956 by the Tinney family of Cumberland, Rhode Island. The Tinneys conducted massive renovations to the whole building and made it a showplace for their extensive collection of antiques.

Harle Tinney is the last surviving member of the family since her husband’s death in 2006. Mrs. Tinney believes that the ghosts of Belcourt Castle are spirits who are attached to certain items that her late husband, Donald, and his parents brought into the house. One of those items is a small, wooden statue of a monk.

Monk Statue at Belcourt Castle Believed to be Haunted

When the statue first came into the Tinneys’ possession, they placed it on display at their previous home. That was the first time they caught sight of the shadowy figure who seems to be linked to the wooden monk. Two weeks after the statue was brought to Belcourt Castle, the dark figure was spotted again. Since then it has been seen no fewer than five times and always within the vicinity of the statue. Donald and Harle Tinney saw the ghost in the Great Hall when the statue was displayed there on a stand by the door to the ladies’ room. At first, they both thought the figure was Donald’s father. However, as the figure opened the door to the restroom the couple could clearly see it was not Mr. Tinney. What also struck them was the fact that the door, which always creaked loudly, emitted no sound. Donald and Harle found no one in the small room when they checked.

The wooden monk is now kept in the Chapel Room on the first floor. It was moved there after a psychic told the Tinneys that the entity attached to the little monk wanted it placed there. That hasn’t stopped the dark shadow from making an appearance from time to time. The most recent sighting was on July 7, 2007, at seven o’clock in the evening. Belcourt Castle was playing host to a wedding when Harle Tinney saw what she thought was a guest heading in the wrong direction. She moved after the figure as it went into the foyer, but as she reached the spot she found no one there.

Bloodcurdling Screams from Inside the Ballroom of Belcourt Castle 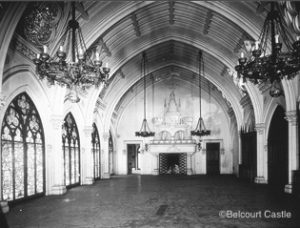 The Gothic Ballroom located on the second floor has had its share of unsettling moments as well. One night in the mid-1990s, Harle Tinney heard three bloodcurdling screams while standing in the middle of the darkened ballroom. Her two dogs reacted to the screaming, but they were far too afraid to enter the room. There is an impressive collection of knights’ armor on exhibit in this room. The suits of armor are all excellent reproductions, except for one helmet that is known to be authentic and does show a battle scar. It is believed the knight who once wore the helmet haunts the armor and what Harle Tinney heard that evening were his death screams.

The late Donald Tinney once heard the sound of a party in progress in the ballroom. It was late in the evening and the house was very still. When he went to investigate the phantom gathering, the family cat came along with him. It seemed to be well aware of the music and chatter. The cat started growling and the fur on its back and tail stood up when the two of them reached the ballroom. The sound then faded away into nothingness as Donald Tinney opened the doors to the room. This ghostly encounter is believed to have been a trace haunting of a happier moment in the home’s history, possibly from the Gilded Age. 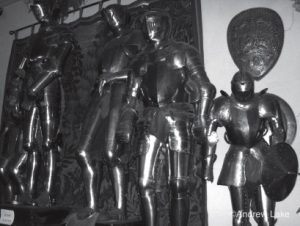 In 1996 a woman who was a guest at a private party being held on the first floor came upstairs to use the ladies’ room that is located in Ruth Tinney’s (Donald’s mother’s) old bedroom. Most of the room is roped off, leaving only the bathroom accessible to the public. As the guest entered the room she noticed there was a lady sitting at Ruth Tinney’s desk. The guest addressed the lady and informed her that no one was allowed behind the ropes. The mysterious lady ignored the woman and her warning. Unnerved by this, the guest went to alert security of the intrusion. A guard was standing close by and lost no time getting to the bedroom. The lady was gone without a trace. No one could have left the room without being seen and there was no place for anyone to hide. When Harle Tinney heard the guest’s description of the lady it was a perfect match for her late mother-in-law. That day was also the one-year anniversary of  Ruth Tinney’s death. Twice in 2010, the bedspread on Ruth Tinney’s bed was seen to be disturbed. A young Englishwoman taking a tour of Belcourt Castle told Harle Tinney that she had witnessed the bedspread move as if someone was getting up off the bed. In July of that same year, Harle Tinney took a couple on a tour of the house; while they were in the bedroom, she mentioned her late mother-in-law. The bedspread, as if on cue, flew right off the bed and landed several feet away on the floor. All Harle Tinney could do was say, “Hi, Mom!” 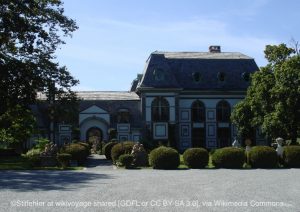 I spoke with Ken and Dave DeCosta, the father and son co-founders of the Rhode Island Society for the Examination of Unusual Phenomena (R.I.S.E.U.P.). Their paranormal team has been allowed into Belcourt Castle to conduct investigations and public ghost hunts. They told me that they have not seen or caught any of the ghosts on camera, but they have recorded examples of electronic voice phenomenon (EVP) throughout the property. Ken and Dave told me the EVPs that were recorded seem to be of a personal nature, so out of respect for the Tinney family they have declined to give me any further details on what the spirit voices said. The most interesting moment caught by R.I.S.E.U.P. on video was a session involving two electromagnetic field (EMF) meters. A member of the team asked if any spirit present could make the lights flash on one of the meters. After the lights on one of the meters flashed on and off, they asked if the spirit could do the same with the other EMF meter lying nearby on the same table. That meter’s lights flashed on and off while the first meter’s lights stayed off. The team continued asking the spirit to please go back and forth between the two meters and the lights flashed on and off as requested. All cell phones were switched off and no other electromagnetic interference could be found within the room.