On October 8, 1862, one of Kentucky’s biggest Civil War battles was fought just west of Perryville when Confederate forces under General Braxton Bragg and Union forces led by Major General Don Carlos Buell clashed. The battle lasted more than five hours; when it was over, more than 7,600 soldiers lay dead, wounded, or were missing.

After the battle the Union soldiers were buried in a cemetery along the Springfield Pike. The Confederate soldiers weren’t so lucky. For three days, both the dead and wounded lay in the roasting sun. They eventually were buried at Bottom Family’s farm, which later became the state park. 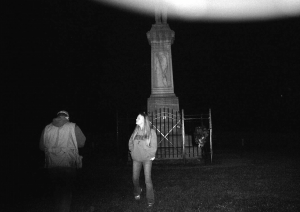 The Union dead did not remain at the cemetery long and were moved to Union cemeteries at Camp Nelson and Lebanon, Kentucky. It was not until 1902 that the Perryville Commission placed a monument dedicated to the Confederate soldiers who fought and died at the Battle of Perryville. The Perryville Battlefield site has become a favorite for reenactors, who come to the park for the annual reenactment on the weekend closest to October 8th. Three times a year, the Perryville Battlefield park also offers a ghost seminar and a ghosthunt for visitors. 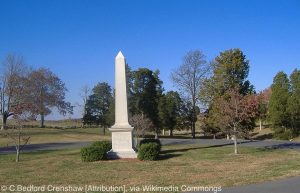 Patti Star, author of Ghosthunting Kentucky, talked with Joan House, Program Coordinator and Preservation Specialist of the Perryville Battlefield State Historic Site. Patti asked her, “What is the most common story that you have heard about the ghosts of Perryville?” Joan replied, “The one about Patrick Cleburne’s horse. During the battle, the Brigadier General was charging the enemy when his horse was killed by being shot out from under him. Soon after the battle, the locals would report hearing a horse galloping by or near them, but when they would look for the horse there was never one around.” “Have you ever heard the horse?” Patti asked. She smiled and said, “Oh, yes, I have. One late night while I was camping out with some of the reenactors, we heard the sound of a horse’s hooves running on the pavement near the camp. We thought that maybe one of the horses in the camp had gotten loose, so we set out to find it. We aimed our flashlights out into the darkness but didn’t see a horse. We went back to the enclosure and counted the horses, and they were all there. None were missing. It was at that moment I realized that we had heard Patrick’s ghost horse.” 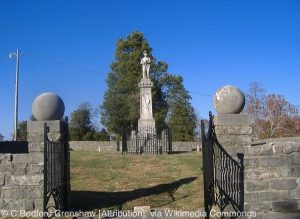 While talking, Joan remembered another story that had happened while camping during a reenactment. She said that two of the reenactors were noted historians, and they told her a great story about being visited by a Civil War ghost. The men were asleep in their tent when they were awakened by what they thought was another reenactor. He barged into the tent and demanded to know the whereabouts of one of his soldiers. They looked at him and didn’t recognize him as part of their group. He called his soldier’s name over and over as he walked around in the tent looking for him. One of the men asked him who he was, and the intruder stated his name and rank. He then turned and stormed out of the tent. The two men got up and followed him as he went to the tent next door. When they got to the other tent, he was gone and wasn’t seen or heard of again. The two historians decided to investigate, so they looked up the names that this stranger had given them. To their amazement, they found that both names were listed as two of the men killed at Perryville.

It’s hard to believe that this pristine and peaceful paradise, filled with deer, beavers, turkeys, and other birds, and bordered by miles of 19th-century stone fences was once the site of so much death and destruction. But it was. One can only hope that the ghosts of Perryville will eventually find the peace that now surrounds them.