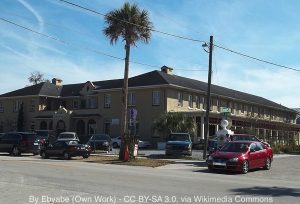 Cassadaga, Florida, is like no other small town in America. There are no banks, no drugstores, no laundries, no gas stations. There are few people wandering about and no children playing in the streets. It is almost unearthly quiet, and that’s the way the townspeople like it.

George Colby, a New York medium, was led by his spirit guides to Florida to establish a spiritualist camp at Cassadaga in 1875. Mr. Colby, suffering from tuberculosis when he arrived, found the waters at the site he chose to be soothing. He later was completely cured. The Cassadaga Spiritualist Camp quickly became an educational center where Spiritualism could be taught unhindered by outside interference. The oldest active religious community in the United States, Cassadaga is now a mecca for spiritualists, mediums, astrologers, and psychics.

The humdrum activities, sounds, and sights of a normal small town may be missing in Cassadaga, but spirits are here. The air in this tiny town off I-4 between Orlando and Daytona fairly shimmers with energy. Visitors can find almost any sort of spiritual counseling they want. Black magic and witchcraft are not used.

Of course, Cassadaga has its hauntings. The most famous are found at the old Spanish-style Cassadaga Hotel. Arthur, an Irish tenor, lived at the hotel for a time and died there in the 1930s. He is occasionally seen in the hallways by guests, and he will answer questions by flipping lights on and off. Arthur lived there in the days before air conditioning, and his room, number 22, smells of body odor. It also smells of cigars and gin, which Arthur apparently enjoyed.

Or did those aromas come from Gentleman Jack, another entity whose presence is often reported? No one seems to know now where he came from or very much about him, but he also supposedly haunts the hotel along with two little girls, Sarah and Katlin, who frolic up and down the halls.

Whether you stay in the hotel or come only for the day, Cassadaga is worth a visit just to enjoy the quiet and feel the incredible energy of the town.

The Cassadaga Spiritual Camp offers guided tours. If you are interested in a stay at the Cassadaga Hotel, check the website for availability.

People may think that Florida is all about Mickey Mouse; however,  in his book Ghosthunting Florida, author Dave Lapham proves that the state is fertile ground for entities even more fantastic than a talking mouse. The book is a spine-tingling trip through Florida’s small towns and lively cities, its historic sites and fun spots, all of them haunted.