Spotlight on Ghosts: The Lady of the Lake

As far back as the 1930s, stories have circulated throughout the Dallas area about a spectral women wandering in search of help.  She is reportedly seen by many people near White Lake, though no one knows exactly who she is.

One of the most common experiences reported is that of drivers in the area who happen to see a wet and stranded girl near the lake in search of a ride home. Several drivers have stopped to offer the poor girl some assistance, only to have her disappear a short while later, leaving nothing behind but a damp mark in the vehicle where she had been sitting. 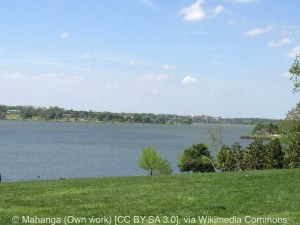 This vanishing hitchhiker has fascinated people in the area for decades. Some think she may be the spirit of a young women involved in some sort of fatal accident on the lake where she and others may have died.  Desperate to get home to her family, she provides the driver with an address before suddenly disappearing from the car.

Those who have taken it upon themselves to locate the address found that, indeed, the family living there had lost a young woman to a tragedy on the lake.

The ghostly apparition witnessed by many at White Rock Lake may actually be more than one female spirit. Other accounts tell of at least two other women who perished in the water between 1935 and 1942 due to suicide by drowning.  Visitors to the area have not only seen the figure of a woman hitchhiking for a ride, but also rising up out of the water before vanishing into thin air.

This legend had survived for nearly a century. Is the lady of the lake still wandering the night asking passersby for help? Could there be several female spirits destined to roam the area for eternity? The only way to find out is to take a drive out to White Rock Lake and see for yourself. You just might end up with and extra passenger…or two.

In her book Ghosthunting Texas, author April Slaughter puts the spotlight on many ghosts that roam the State of Texas. Enjoy Ghosthunting Texas from the safety of your armchair or hit the road using the maps and ghostly resources of her book. Either way buckle up and get ready for the spookiest ride of your life.

About the author: April Slaughter and her husband Allen are the founders and executive directors of The Paranormal Source, Inc., a nonprofit research and education corporation based in Dallas, Texas.