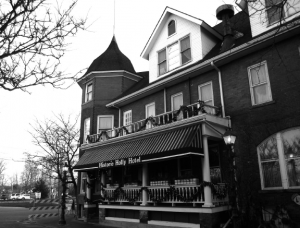 The historic Holly Hotel is said to be the single most haunted building in the state of Michigan. It has been written about in newspapers and magazines and has been featured on both local and national television. In 2009, it was the subject of an episode of the popular Travel Channel program The Most Terrifying Places in America. Numerous paranormal investigators have visited the Holly Hotel, including the Motor City Ghost Hunters, the Ghost Hunters of Southern Michigan, the Michigan Paranormal Research Association, and well-known parapsychologist Norman Gauthier, who concluded that the building was “loaded with spirits.”

Despite its name, the Holly Hotel is no longer an inn and does not accommodate overnight guests. However, the dining room remains a favorite spot for dinner, afternoon tea, and Sunday brunch. Dinner is served nightly, while a traditional Victorian-style high tea is served every day except for Sunday. The restaurant’s menu is an award-winning blend of traditional signature dishes, some of which have changed very little over the last century, and contemporary seasonal fare. In addition to being featured in magazines and on television for its ghosts, the Holly Hotel is known nationally for its fine cuisine.

The Holly Hotel suffered two major fires in its long history. The first occurred on January 19, 1913, and the second was 65 years later on January 19, 1878. Reports have it that both fires started at “exactly the same time, to the hour.”

In fact, the Holly Hotel has been the sighting of a number of apparitions over the years. One of the most frequently seen is believed to be the spirit of Nora Kane, a former hostess of the inn. Many guests claim to have seen her in the bar area and in the back hallway, which used to be the main entrance to the hotel.

The inn’s most famous ghost is probably former owner Mr. Hirst, who passed away in the 1920s, but who, many believe, has never let go of his hotel. He is reputed to be the most active—and most unhappy—when renovations have been made to the property. A myriad of other spirits are said to inhabit the 120-year-old building.

Helen Pattskyn visited the Holly Hotel and interviewed the staff and owner. Find out all about their ghostly tales in her book Ghosthunting Michigan.