Michael O. Varhola, author of Ghosthunting San Antonio, Austin, and Texas Hill Country,  takes us on a visit to Mission San Antonio de Valero, know to most of us as The Alamo.

In 1718, after Mission San Francisco de Solano in the Rio Grande Valley became unviable because so many of its resident Coahuiltecan Indians had left it, Father Antonio de San Buenaventura y Olivares relocated it to a spot near the headwaters of the San Antonio River. He had passed through the area a decade earlier and been impressed with its suitability for a religious community. He named the new mission in honor of Saint Anthony of Padua and San Antonio de Valero, the Spanish viceroy who had approved his plan. 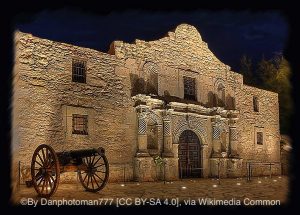 Location of the mission changed several times for the first few years until 1724, when the present site was chosen, and the foundation of its stone church was laid 20 years later, in 1744. It eventually included a walled compound containing the church, a convento where the clergymen lived, and a number of adobe buildings.

While the Alamo is almost synonymous with the battle that bears its name, it was by no means the first time the mission or its residents were exposed to violence or dangers. On June 30, 1745, for example, Apaches attacked the nearby civil town of San Fernando. One hundred mission converts from the Alamo sallied out and, reinforced by European arms and tactics, helped drive them off.

Mission San Antonio de Valero was the first of the local missions to be secularized and was taken over by Spanish authorities in 1793. They established the first hospital in Texas in it. Its central location and infrastructure also made it ideal for use as a barracks and, by 1803, a company of 100 heavily armed cavalrymen, along with their families, had moved into it. They remained there for 32 years, battling Indians, the military adventurers known as filibusters, and revolutionaries. When Mexico became independent of Spain in 1821, they shifted their allegiance to the new nation. And when they skirmished with Anglo-American revolutionaries near the town of Gonzales on October 2, 1835, the Texas Revolution began.

Texian forces counterattacked toward the end of that month and laid siege to San Antonio. Then, on December 5th, they attacked the town directly and, after fighting the Mexican troops toe-to-toe in brutal street fighting for five days, forced the military authorities to surrender. Thus it was that the Texians took control of the city. When General Antonio López de Santa Anna arrived at the head of a Mexican army on February 23, 1836, the Texians withdrew to the east bank of the San Antonio River and occupied the Alamo. Santa Anna raised the red flag of no quarter over San Fernando church, and a siege of the mission began.

On March 6th, Santa Anna launched his final attack on the Alamo and, after a fierce 90-minute battle, captured it and slew all 189 of its defenders, at a cost of about 600 killed and wounded among his own men. Commanders William Barret Travis, James Bowie, and David Crockett were among those who fell in battle. Santa Anna ordered all the bodies burned on at least two common pyres and left to smolder for days (although that of one defender, Tejano Gregorio Esparza, whose brother was one of the Mexican officers, received a proper burial). 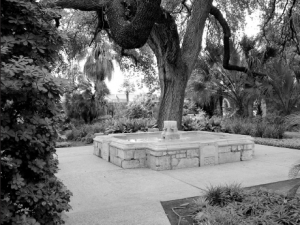 Six weeks later, on April 21st, Texian forces led by Sam Houston defeated Santa Anna and the Mexican army in the Battle of San Jacinto, about 200 miles to the east. The following month, the Mexican garrison in San Antonio was ordered to destroy the Alamo and then withdraw. They did manage to tear down some of the outer walls, and their commander, Juan José Andrade, sent a detachment of men to blow up the church where the defenders had made their final stand. These men were reportedly prevented from doing so, however, by a party of what they identified as diablos. They were described by paranormal researcher Docia Schultz Williams in her book Spirits of San Antonio and South Texas as “six ghostly forms standing in a semicircle holding swords, not of steel but of fire, blocking their entry to the building.”

“They were terrified and fearful of the consequences if they should destroy the building, they reported back to their commander,” Williams continues. “It is said General Andrade went himself to the place and was also confronted by the same figures. And so it was that the building was left intact as the Mexican army marched out of San Antonio.”

Apparitions were reported again at the site in 1871—which at that point was being used as a police station—when the city tore down part of the surviving mission complex, a pair of rooms that had been located to either side of the main gate in the south wall. Guests at the Menger Hotel across the street were among those who claimed to see spectral soldiers marching along the perimeter of the old mission compound as if trying to defend it from further desecration.

Many people, too, have striven to protect the legacy of the Alamo. In the 1930s, as the centennial of the Battle of the Alamo approached, the entire complex was renovated, expanded, and converted into a parklike memorial, and a Centennial Museum was built behind the church (and currently serves as the gift shop for the site). Then, in 1968, the Daughters of the Republic of Texas opened a new museum in the convento, or “long barrack,” finally putting the oldest building on the mission grounds back into use.

The Alamo by night
Copyright: By Danphotoman777 [CC BY-SA 4.0], via Wikimedia Commons