Kailyn Lamb, author of Ghosthunting Colorado, takes us on a tour of the Croke-Patterson Mansion in Denver. 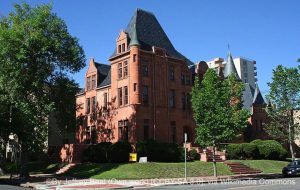 Thomas B. Croke was a teacher from Wisconsin who came to Denver and made his fortune as a businessman. From the beginning, Croke-Patterson Mansion had a reputation. A basic Internet search on the house brings up several websites that tell a “legendary” tale of how Croke was not able to spend even one day in his new home because something felt wrong about it. Real estate records reveal, however, that Croke lived in the house for six months, and the real culprit for his vacating the mansion was more likely the crash of the silver market. In addition, Croke’s wife passed away before the home’s completion, leaving him a widower as well as a single parent. Croke’s parents also joined him in the house, but his mother died shortly after moving in. Records and letters show that Croke later traded the house for land that was owned by Thomas Patterson.

Patterson was a US Senator for the state of Colorado, who had previously served in the United States House of Representatives. Patterson was also the owner of the Rocky Mountain News, Colorado’s first newspaper. He lived in the house with his wife, Katherine, and daughters Mary and Margaret. Patterson also had a son, James, who had committed suicide in California before the family moved into the house. Mary died of chronic illness in 1894; after the death of his wife in 1902, Patterson deeded the house to his daughter Margaret and her husband, Richard C. Campbell. Patterson lived in the house a total of 23 years, until his death in July 1916. The Campbells continued to live in the mansion until 1924, the longest any single family ever did. The Campbells sold the house to the Louise Realty Company.

Before becoming home to another family, the mansion changed hands and functions several times. However, the next family to live in the Croke-Patterson Mansion is frequently skipped over in online accounts of its history.

Hauntings Continue at the Croke-Patterson Mansion in Denver 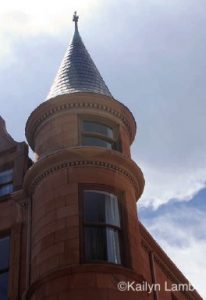 Dr. Archer Sudan purchased and moved into the house in 1947. His wife, Tulleen, who was a nurse, accompanied him. They had a son, Archer Jr., who did not live with them in the mansion, as he was old enough to live on his own at the time. Although Tulleen was said to be happy and social, she committed suicide in one of the bathrooms of the house in 1950 using cyanogas, a powerful pesticide. It was rumored that the reason behind her suicide was that she had a miscarriage. What is most surprising about these residents being excluded from most written histories of the house is that it is the supposed ghost of Tulleen Sudan that permeates most of the tales. A woman who lost her baby, looking longingly out the third-floor window; the sounds of a crying baby when no one is in the house; and the supposed burial of a baby in the basement are among the accounts related to her. There is also a rumor that the baby was murdered. Tulleen, however, was 47 when she died, past the age of healthy childbearing, and there is no record of a child being born in the house. Some people who have entered the house even claim that they begin to feel as if they cannot breathe when walking up the stairs to the third floor. Cyanogas creates cyanide when combined with moisture, effectively suffocating anyone close enough to be exposed to the gas. Supposedly, Tulleen used a bathtub full of water, creating the cyanide to kill herself. Dr. Sudan continued to live in the house until 1958. After he and his second wife moved out of the house, Archer Jr. moved into the mansion, serving as landlord for the separate apartments his father had created upon moving in. Records show it was sold in October 1972.

Many of the stories of apparitions point to Tulleen’s spirit having never left the house after her death. But there is more to the story of the mansion. History major Mary Rae and her husband became the next owners in April 1973, saving it from demolition and later helping to make it a historic landmark.

In the late ’70s, the building was renovated to become an office space. Construction workers would leave for the night, only to come back the next day and find all their previous day’s work undone. Suspecting that people, and not ghosts, were behind it, workers put a fence around the building, and when that did not work they brought in a guard, who quit after one night. Next, guard dogs were brought in to protect the work site. There are multiple accounts of what happened next, but they all agree on one thing: One of the dogs jumped from a tower window in the building on the first night and died of his injuries within several days. According to other versions of the story, another one was also mortally injured on the second night. The other guard dog was found in the basement in a catatonic state, in which he remained for the rest of his life.

Despite these setbacks, the office space was eventually completed, but the hauntings did not stop, and employees would hear typewriters and other office supplies being used when there was no one around. Many tied this to Thomas Patterson, saying that some scandal or story had not made it into the paper, so a departed Patterson was going to do it himself.

There is also a story of the ghost of Katherine Patterson helping a pregnant resident roll over. Rocky Mountain Paranormal Research Society (RMPRS) has worked with the current and previous owners of the building, such as Dr. Douglas Ikeler and his wife, Melodee. Bryan  Bonner of RMPRS says that he heard the story of the pregnant woman firsthand from Melodee, who lived in the mansion with her husband for 10 years. Bonner added that, including the owners he has personally worked with, anyone who has been in contact with the mansion for long periods of time seems to start to “lose it.” He used Tulleen Sudan as a prime example.

RMPRS also did a radio show out of the mansion during one of the periods it was vacant. Its members decided they were going to stay the night there for the show. One of the sound engineers stayed in the basement. According to Bonner, he came back upstairs immediately, saying there was a man standing in the corner. They searched the mansion but could not find a man. Bonner added, however, that it was the same corner of the basement where the catatonic dog was found, and it was the same corner in which the Ikelers’ daughters had previously claimed to have seen a man standing by their toys. 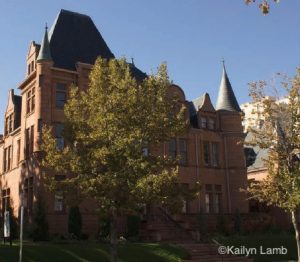 The house remained vacant for a while before its most current owner, Brian Higgins, and his business partner at the time, Travis McAfoos, purchased the building in hopes of turning it into a bed-and-breakfast. Higgins decided to film the renovations on the building, documenting his own “hauntings” and mishaps that occurred while the work was in progress.

After an 18-month renovation, the mansion was reopened in August 2012 as the Patterson Bed and Breakfast. Since then, it landed on CBS’s top 10 bed-and-breakfasts list in July 2014. With nine themed rooms and accommodations such as large flat-screen TVs, Higgins has worked hard to erase the stigma surrounding the Croke-Patterson Mansion. He renovated it for the modern world but kept some of the historical Victorian-era design, such as the mansion’s famed stained-glass windows. For the cost of spending a night there, paranormal enthusiasts can decide for themselves whether the mansion is still haunted.