Michael J. Varhola, author of Ghosthunting Virginia, visits Gadsby’s Tavern in Alexandria. Established around 1785, Gadsby’s Tavern has been a quintessential Alexandria watering hole throughout most of U.S. history. And, as with most places of a certain age, it has a number of ghost stories and is a stop on local ghost tours.

In the early years of the republic, however, especially prior to the founding of the capitol city, Alexandria was a vibrant port city, and Gadsby’s Tavern played host to many of the most important people in the country. George Washington celebrated his birthday at the tavern in 1797 and 1798; Thomas Jefferson held his inaugural banquet there in 1801; and the tavern served as a hub of political, business, and social interaction for many years. 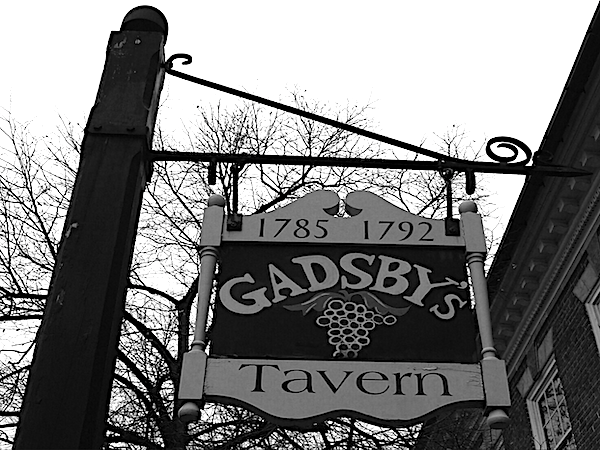 Gadsby’s Tavern consists of two separate buildings and two separate establishments. One is a museum, located in an older, two-story building, and the other is a restaurant, located on the ground floor of a three-story expansion to the original structure built in 1792 (then dubbed the City Tavern and Hotel).

A number of stories about incorporeal spirits, rather than the liquid ones it has traditionally served, have developed about Gadsby’s Tavern, and I had heard a number of them over the years. The most famous involves a beautiful young woman who died at the establishment nearly 200 years ago and whose specter is sometimes purportedly still seen there.

As a common version of the story goes, the young woman and her husband arrived at the port of Alexandria in October 1816 from points unknown. She was very ill and was taken to Gadsby’s Tavern, where she received treatment from a doctor and a number of nurses. Despite their best efforts, however, she died on October 14. For reasons still unknown, her husband made everyone they had dealt with swear that they would never reveal her identity; he had her buried in nearby St. Paul’s Cemetery beneath a nameless tombstone, and, soon after, he disappeared without paying any of his bills, including $1,500 for the stone.

Since then, visitors have reported seeing the ghost of the “female stranger” standing near her headstone, wandering the halls of Gadsby’s Tavern, or peering out its windows while holding a candle (and, possibly, awaiting the return of her apparently deadbeat husband). Explanations for who she is have included the ward of an aging English aristocrat who was accidentally slain by her lover, with whom she fled to America; the daughter of Aaron Burr, who gunned down Alexander Hamilton in a duel; and an orphan, separated from her three siblings at a young age, who inadvertently married her brother. Die nameless and leave bills behind and, specifics aside, the stories about you are pretty sure to be sordid.

Other ghost stories associated with the tavern are fairly typical of those associated with haunted sites in general and include candles or lanterns that appear to be burning, but, upon examination, have not been recently lit.

Glancing at the upper-story windows of the buildings as I approached them, I did not see anything out of the ordinary. The first thing I learned upon being greeted inside the entrance to the restaurant by a distinguished-looking older gentleman is that it’s no longer a tradition to drop in for just a cold one at the tavern—the norm being to partake of a meal as well—and that I would be better served for those purposes at a nearby Irish pub (of course!). Upon seeing my disappointment, however, he graciously relented, showed me to a two-person table in the dining room, and asked his waiter to bring me a beer.

“Are you the manager?” I asked him.

“Sometimes,” he replied somewhat cagily (demonstrating a dry sense of humor that was revealed when I eventually obtained his business card and read upon it the title “General Manager”), and he introduced himself as Paul Carbé. I introduced myself and briefly explained my interest in his establishment.

“Oh, you want the museum next door,” he said, crushing any hopes I might have of encountering spectral spoor at his establishment. I decided to enjoy my Gadsby’s ale and the ambience of the place, which included waitstaff dressed in garb reminiscent of the Colonial era, pewter place settings on the tables, and dark wood paneling that, in some cases, dates to 1792. 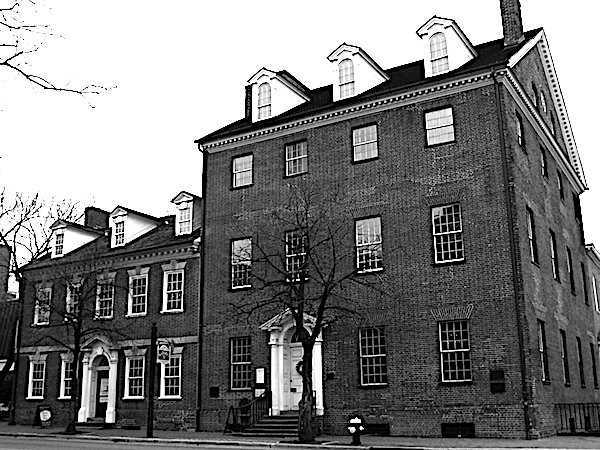 “That’s original,” Carbé said, indicating the wooden fireplace mantel in the first of several tidbits of information that he congenially bestowed upon me on his way back and forth from the back of the restaurant to the front, where he dutifully greeted everyone who came through the door. Eventually, however, he decided to bestow something more substantial upon me.

“Come with me,” he said, and led me to the back of the restaurant and into its kitchen. There, he proceeded to tell me about three strange episodes that some would take for evidence of a ghostly presence—all of which had occurred in the previous month!

In the first, he said, one of his waitresses walked into the kitchen and asked if anyone knew where beverage napkins were. As if in response, a package of beverage napkins pitched off a nearby shelf and landed on the counter next to the stunned young woman.

The second incident took place in a dining room that had been set up for a dinner party. With no apparent cause or prompting from anyone, a spoon from one of the place settings slid off the table and clattered onto the floor.

And, in the third incident, three or four of the waitstaff were working in the tavern after it had closed when they all distinctly heard a candle in the main dining room—where none of them were—being blown out.

As is the case with most ostensibly haunted sites, none of these incidents necessarily mean anything in and of themselves. Even when they are considered as elements in an ongoing pattern of similar incidents, they prove nothing. But they do reinforce to those willing to acknowledge them that there is more in this world than can easily be explained by most philosophies, to paraphrase a famous playwright.

That was what I thought to myself, in any event, as I finished up my pint of ale and snapped a few more pictures of the tavern. Collecting my things, I thanked Mr. Carbé for his helpfulness and stepped outside into a late afternoon that had turned from gloom to drizzle.

Turning back toward Gadsby’s Tavern as I walked away, I looked up at some of the upper-story windows, hoping I might catch a glimpse of the ghost of the “female stranger.” But I did not prolong my gaze. After all, if you stare at something long enough, you can end up seeing just about anything, whether it is really there or not.