Dave Lapham, author of Ghosthunting Florida, puts the spotlight on the Island Hotel at Cedar Key. 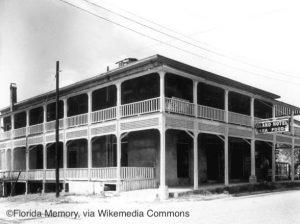 Cedar Key is a really cool place. Old Crackers say that Cedar Key is like Key West was fifty years ago. I don’t know, but I do know that, although I really love Key West, I’m always enchanted by Cedar Key, where Sue and I go often to rejuvenate. No laptops. No cell phones. We don’t even watch TV when we’re there. Just the two of us on a laidback island where time doesn’t mean much, and what is happening in Washington or Wall Street doesn’t have much relevance.

My friend Rosemary Norman and her husband feel the same way. Maybe we should have a “Pencil Head” thing like Key West enthusiasts have their “Parrot Head,” since not so long ago Cedar Key was a major producer of pencils. Anyway, Rosemary, who is the founder of West Florida Ghost Researchers and an unusually sensitive person, has been to Cedar Key so many times and has had so many experiences, that she deserves to be named “Chief Ticonderoga.” 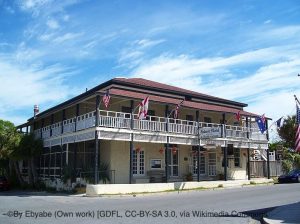 On her first visit to Cedar Key—she and her husband had just discovered the island—Rosemary woke early on Sunday morning and decided to go for a walk. The weather was balmy with a gentle breeze blowing off the Gulf. Few people were about, and she was enjoying the morning. She walked down Second Street intending to turn right on A Street and walk around the pier. As she strolled along, she saw an attractive couple seated at a table across the street at the Island Hotel. The woman was wearing a beautiful, lavender dress and hat, the man a suit with a high celluloid collar. Both were nicely attired, but Rosemary thought it odd that their clothes looked as if they were from the Gay Nineties. Oh well, perhaps they were here dressed for a period event.

She waved to the couple. The lady smiled at her and raised her tea cup. Rosemary went on. After swinging around the pier, she decided that she’d go back up Second Street and down Third Street just to see the sights.

This time as she passed the Island Hotel, she saw no one. There was no table in front or any room for one, only dirt and broken concrete. Curious, she crossed the street and went into the hotel. No breakfast was being served; the dining room was closed. The receptionist sat half asleep at the desk. There was no activity at all. It was then that she realized she’d seen ghosts.

Rosemary and her husband have been back many times, and she has yet to see the lady in lavender. Still, she has always been satisfied. The island is so haunted, she has no problem running into spirits.