Oozing with southern charm, it’s no surprise that some guests never want to leave the Carolina Inn in Chapel Hill 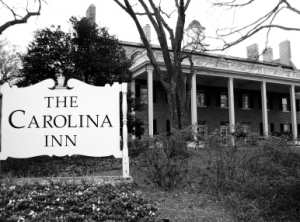 The distinguished Carolina Inn was built in 1924 to attend to visitors and alumni of the University of North Carolina. The architecture of the building was patterned after that of George Washington’s home in Mount Vernon.

The ballroom of the Carolina Inn is considered to be one of the most haunted areas of the inn. Perhaps it’s second only to Suite 252, where Dr. William Jacocks lived for almost 20 years. He’s been reported to be a friendly ghost and very welcoming. Guests report that even in the absence of fresh flowers in the room they will be welcomed with an overwhelming floral scent. Others will be greeted with a strong cologne smell.

Dr. Jacocks is known to be a fun-loving prankster. He reportedly enjoys playing tricks at the inn, including locking guests out of Room 252. The local lore states that at one time, the door had to be taken off its hinges because it was so stuck it wouldn’t open under any circumstances. Electronic locks were installed in the hotel in 1990, but there continue to be repeated complaints of the door refusing to unlock.

Other guests have reported all sorts of paranormal activity in the room, including curtains being pulled open in a wild manner and icy spots in the room, even when the air-conditioning is not running. Staff at the inn report seeing a man appear in a black suit with a blue overcoat and knit hat walking around the inn. He reportedly goes from door to door touching and jiggling the knobs. Some guests have reported hearing the sound and opening the door to see what the man wants, only to watch him disappear before their eyes.

Some reports claim that there are up to 20 ghosts at the inn. Witnesses have heard the sound of a piano playing in areas where there is no music or musical instruments. Others have heard footsteps in empty rooms. Voices have been heard, orbs recorded, and sightings of ghosts are reported around the inn on a frequent basis.

The inn’s owners are comfortable with the reports and host a yearly Halloween event that includes a ghost tour and an overnight stay and dinner to discuss the activity in the hotel. The ghosts have all been reported to be friendly and enjoy the inn so much that they refuse to leave.

The Carolina Inn is owned by the University of North Carolina and listed on the National Register of Historic Places, so once again, you know it’s going onto my National Register of Haunted Places list. The inn is full of yummy Southern hospitality, and the staff is warm and welcoming; it’s no surprise to me that guests would want to stay for a lifetime and beyond. With 184 cheery and beautifully decorated rooms and a wonderful location by the university, it’s often referred to as the University’s Living Room.

During my visit to the inn, I enjoyed walking around the property. The most widely reported incidents of ghostly activities are inside the building, but to my surprise, where I felt the most activity was around one of the doors.

He is felt in the suite as well as around the inn and enjoys playing a few pranks. While touring the inn, I felt a ghostly presence playing with the door here.

As I walked through this door, I was looking down at the ground. I had felt a strange energy in this area, and while focusing on this energy I nearly dropped my camera and reached out quickly to grab the strap. While doing so, it felt as if I bumped solidly into a person. Startled, I stepped back and looked up to apologize to the person whom I had run into, only to find myself completely alone. I looked all throughout the room, but there was no one to be found. The entity that I bumped into had felt as solid as a man. Unfortunately, whoever it was, it had no desire to communicate further with me and did not appear again. Perhaps I had startled it as much as it had startled me. One never knows quite what will happen next when ghosthunting, and the majority of the time, it seems to happen when you least expect it.

In her book Ghosthunting North Carolina, author Kala Ambrose explores the most terrifying paranormal spots in the state.