The Navarre building, which is now a museum, used to house a brothel. Its location directly across the street from one of Denver’s most prestigious hotels caused some problems for businessmen who did not want to be seen going from one place to the other. Tunnels underneath the buildings helped to solve that problem. 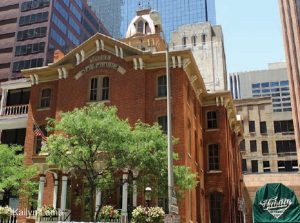 Bar brawls and loose women are indelibly part of the history of the Old West, and Denver, once established, had its red-light district too. Some of these brothels became connected to expensive hotels via an intricate underground tunnel system that was built beneath the Mile High City, as its wealthy citizens did not want to be seen coming and going from such establishments. Rumor has it that these passageways were put  to further use during Prohibition, and many businesses used them to transport liquor and sometimes trade it with brothels.

Kailyn Lamb, author of Ghosthunting Colorado, shares with us the story of one of these brothels, The Navarre.

The Navarre was originally built as a school for girls in 1880 and was called the Brinker Collegiate Institute. While originally it served only women, it soon became a coed institution. After the death of the school’s namesake in 1889, the building was sold and reopened as Hotel Richelieu, a more infamous type of establishment. Here, gentlemen could dine with ladies of the night, either publicly or in more private areas of the building.

There was a potential pool of clients just across the street at the Brown Palace Hotel, but business did not take off quite as quickly as the owners of the Richelieu might have hoped. As noted, to be seen coming to and from the Richelieu from the Brown was not ideal for a gentleman, so the idea for the tunnel system was born. The first tunnel connecting the basement of the Brown to the Hotel Richelieu was constructed around 1892. Later, a whole system of tunnels would spread underneath Denver, connecting other hotels—and even the government buildings of the city—to the whorehouses.

Today, buildings can tap into the tunnels for hot or cold air, an unlikely heating and cooling system that is sold by the city of Denver. Bryan Bonner and Matthew Baxter of the Rocky Mountain Paranormal Research Society (RMPRS) said that, due to movement of air, the tunnels can make a plethora of ghostlike sounds. They also said that, unfortunately, some of the tunnels are too dangerous to enter, and many have been closed down or sealed.

With the help of the tunnels, the Richelieu became the second-best brothel in the city, after Mattie’s House of Mirrors—which, incidentally, is also considered to be haunted.

Many of the ghosts believed to reside in the building (now called The Navarre), predominantly on the second floor, are said to be those of the working girls. Bonner said that on one of RMPRS’s ghost tours, a guest allegedly saw someone pull back a curtain while the group was standing in front of The Navarre. He said it was unlikely anyone was working in the building at the time, as it is now the home of the American Museum of Western Art—the Anschutz Collection. As all of the RMPRS tours are done at night and after business hours for the museum, only security personnel should have been in the building and, according to Bonner, they never leave their posts. His theory is that the mysterious figure who pulled back the curtain may have been the ghost of a working girl.

The building continued to be used as a brothel until the early 1900s, when it became home to a different kind of discouraged business: gambling. In fact, the building’s current name, The Navarre, came about after the building was lost in a card game. The new owner named the building for a French king. One of the building’s ghost stories is that of a man who was not gambling well one night and decided to pull his gun and shoot himself in the chest for everyone to see. It is said that visitors can hear him wandering the halls on the lower floor.

After the city began clearing out gambling halls and brothels, the building became a fine restaurant and eventually a top jazz club in the city. It was purchased in 1997 by the Anschutz Corporation. Regardless of who owns it, however, the RMPRS leaders say it is a good idea to keep an eye on The Navarre, as it currently seems to have a lot of ghostly activity happening inside.