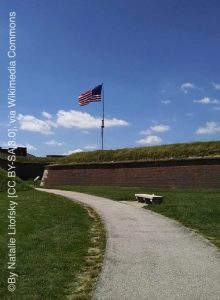 Just across the Inner Harbor is Fort McHenry, the object of the battle immortalized in Francis Scott Key’s The Star-Spangled Banner, America’s national anthem. A symbol of freedom when it prevented British invasion during the War of 1812, the fort came to represent oppression to many pro-South Marylanders when the Federal government occupied it and used it to help maintain its grip over the local area during the Civil War.

With such history and passions associated with Fort McHenry, it should not be too surprising that it has also long had a reputation for being one of the most haunted sites in a very haunted city. Over the years, all sorts of paranormal activities have been reported at Fort McHenry, including sightings of spectral figures on its earthen ramparts, disembodied voices, footsteps in empty areas, spots of unnatural cold, and furniture that levitates and otherwise moves around. Some investigators have even postulated that the fort’s shape—that of a five-pointed star—has some occult significance and might play a role in the preponderance of supernatural events that have occurred here. 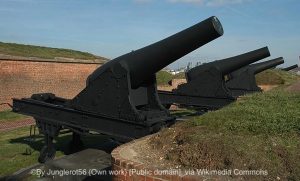 A number of specific ghost stories have also been associated with the site and recounted in numerous articles, television shows, and Internet postings. One of these involves the ghost of U.S. Army Lieutenant Levi Clagett, who, along with some of his men, was killed when a bomb burst not in the air but in their gun emplacement. Numerous people have seen both a spectral figure and a man dressed in a uniform appropriate to the period, walking along the top of the star point sometimes known as “Clagett’s Bastion” at times when no costumed people were present in the fort.

Another named ghost associated with the site is that of Private John Drew, a soldier who was reportedly confined in one of the fort’s cells after he was caught sleeping while on guard duty and who, in shame, killed himself. His specter has been seen both in his cell and on the ramparts where he walked his last post, forever trying to correct the mistake that ended his military career and his life.

Some of the most dramatic paranormal events at the fort involve attacks on people by what has been variously described as a woman, a white figure, and an invisible entity that has reportedly done such things as push some people down stairs and knock others unconscious. Some believe this spirit is that of the wife of a noncommissioned officer assigned to the fort whose children died during an epidemic in the 1820s.

One ghosthunting group that recently visited the site is the Maryland Tri-State Paranormal. Founder Ana Bruder told me that while they were there, her friend Laura suddenly said, “I feel like I am being watched.” Ana, who is sensitive to the presence of spirits, turned and saw the ghost of a uniformed soldier staring at her friend, just one of several spirits she detected while at the site. 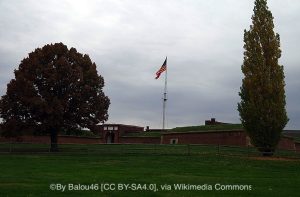 Numerous other ghost stories and episodes of paranormal activity have also been associated with the site. Many of the accounts of ghostly activity at Fort McHenry were originally reported by park rangers assigned to the site, and that remained the case up until a couple of decades ago. Today, however, in what they say is an effort to keep the site from being regarded as a “haunted fort” and to instead emphasize the non-supernatural history of the National Monument and Historic Shrine, the managers of Fort McHenry decline to directly comment on phenomena that are still regularly reported by visitors.

Potential ghosthunters should also expect to have anything they ask to do at the site be curtailed by red tape. A favored tactic at Fort McHenry is to require application of a “special use permit” for anything its managers don’t really want people to do—the major exception to this being, it would seem, historic reenactment, for which the site has become a virtual playground. The important thing to remember is that the site is public property and that very little of what is involved in most investigations should actually require any sort of permission anyway.