In today’s post, Michael J. Varhola, coauthor of Ghosthunting Maryland, shares with us the story of the U.S. Coast Guard Cutter Taney. 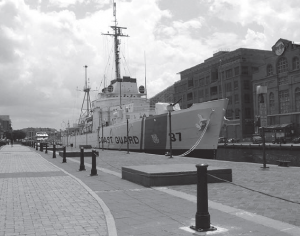 Innumerable vessels have passed through Baltimore harbor over the more than three centuries that the city has served as one of the most important ports in North America. Some of these have come to stay for good and, like historic buildings, have been restored and made ready for visitors at Baltimore’s Inner Harbor.

Also like historic buildings, a great many of them—all storied vessels and in several cases veterans of combat in foreign seas or other harrowing action—have ghost stories associated with them. And many of them, even those that are not “officially” occupied by ghosts, participate in “haunted ship” events around Halloween.

Launched in 1936, U.S. Coast Guard Cutter Taney is notable as being the last ship afloat that fought at Pearl Harbor during the surprise Japanese attack on Hawaii in 1941. That alone would warrant it having a few ghosts aboard, but its period of active service continued for many more years, and the vessel was not decommissioned until 1986. USCGC Taney also served as a command ship at the Battle of Okinawa and as a fleet escort in the Atlantic and Mediterranean during World War II, interdicted enemy supplies during the Vietnam War, patrolled in support of drug interdiction and fisheries protection, and joined in the search for lost aviator Amelia Earhart.

In chatting with people who work around the Inner Harbor, we learned that after USS Constellation, USCGC Taney is the local vessel with the greatest reputation for being haunted. Many staff of the vessel and visitors alike—especially those participating in overnight programs—have reported constantly  catching movement out of the corners of their eyes when aboard and seeing spectral forms gliding across its decks and past its open hatchways.