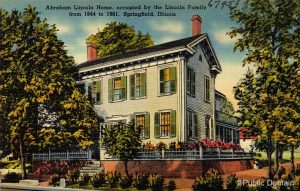 When self-taught lawyer Abraham Lincoln rode his horse into Springfield, Illinois, in 1837, all his meager belongings were packed into two saddlebags. Five years later, the rising young attorney married Mary Todd, a well-educated woman from a prominent Kentucky family, and in 1844 the Lincolns paid $1,500 for a Greek-Revival cottage at the corner of Eighth and Jackson Streets. For the next 17 years, the house—considerably enlarged by Lincoln— sheltered the growing family. Three of his four children were born there, and one of them, Edward, died in the house at the age of 4.

On February 11, 1861, the Lincolns left Springfield by train, headed for Washington, D.C., where Lincoln would be sworn in as the 16th President of the United States. He never again saw his Springfield home, but in 1865 his somber funeral cortege passed by the house, decked out in black-and-white bunting, as it made its way to Oak Ridge Cemetery, where the murdered president was laid to rest.

Visitors to the Lincoln Home in Springfield Report Seeing a Tall, Thin Apparition with a Little Boy

Since then, some visitors to the Lincoln home have reported seeing a tall, thin apparition with a little boy, perhaps Abe and little Edward. Most visitors who experience a paranormal event in the house, however, say that it is the ghost of Mary Todd Lincoln who lingers there, in the place where she lived the happiest years of her adult life.

Abraham Lincoln was no stranger to events that some might call supernatural. He once related such an event to a few friends, one of them being Noah Brooks. After Lincoln’s assassination, Brooks told the story to the readers of Harper’s New Monthly Magazine, recounting the story “as nearly as possible in his own words”:

“It was just after my election in 1860. . . I was well tired out, and went home to rest, throwing myself down on a lounge in my chamber. Opposite where I lay was a bureau, with a swinging glass upon it—[and here he got up and placed furniture to illustrate the position]—and, looking in that glass, I saw myself reflected, nearly at full length; but my face, I noticed, had two separate and distinct images, the tip of the nose of one being about three inches from the tip of the other. I was a  little bothered, perhaps startled, and got up and looked in the glass, but the illusion vanished. On lying down again I saw it a second time—plainer, if possible, than before; and then I noticed that one of the faces was a little paler, say five shades, than the other. I got up and the thing melted away, and I went off and, in the excitement of the hour, forgot all about it—nearly, but not quite, for the thing would once in a while come up, and give me a little pang, as though something uncomfortable had happened. When I went home I told my wife about it, and a few days after I tried the experiment again, when [with a laugh], sure enough, the thing came again; but I never succeeded in bringing the ghost back after that, though I once tried very industriously to show it to my wife, who was worried about it somewhat. She thought it was ‘a sign’ that I was to be elected to a second term of office, and that the paleness of one of the faces was an omen that I should not see life through the last term.”

That mirror is not in the Springfield house and is lost to history, as are many of the personal items owned by the Lincolns during that time. Lincoln sold most of his furniture when he moved to Washington, and a good portion of it ended up with owners in Chicago, where it was destroyed in the 1871 fire that almost obliterated that city. 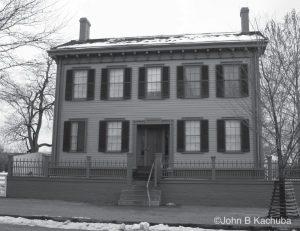 The park employees are reticent to speak about the ghosts. However, Shirlie Laughlin, an employee at the Abraham Lincoln Home, told of her experiences there in a 1998 interview with a reporter from Arlington Heights’s Daily Herald:

“I was rearranging the furniture in Mary Todd Lincoln’s bedroom not long ago, trying to decide whether to move a small chair into another room. Something—someone—kept touching me on the shoulder. I kept looking around, but no one was there. I left that chair right where it was.”

Shirlie also reported seeing the rocker in the parlor move and said that she could feel “wind rushing down the hall,” despite the fact that all the windows in the house are kept tightly shut.

Perhaps if someone can persuade the National Park Service to have a more open mind about the world of the paranormal, we will be able to determine whether it is old Abe, Mary, Edward, or all three who haunt the Lincoln home. Until that time, visitors to the home will just have to try to figure out the mystery for themselves.