Monster Creatures of the Air

Does telling creepy tales around the campfire sound like a perfect night out? Is scaring yourself silly your idea of a good time? Well, the Midwest is home to some pretty spooky ghost stories, but wait until you read about this terrifying monster. 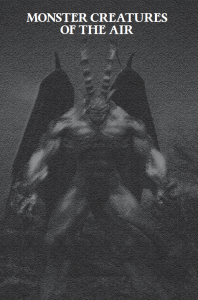 Late at night, O.V. White was asleep in his room over the hardware store. He was startled awake by a strange sound, like a wood file rubbing against another. Grabbing his gun, he darted to the window. He threw it open and peered out into the rainy darkness. As his eyes adjusted, he saw a dark figure. It was perched on the cross arm of the telephone pole, about 15 feet away. But it didn’t have the light that the others had talked about. He aimed carefully and fired. Instead of killing it, he only seemed to wake the monster. It turned on its light and studied him. A strange, awful odor overtook him, and he felt like he was being held in some sort of trance.

Sidney Gregg was asleep in his store. He awoke after hearing a gunshot that came from across the street. He rushed to the door and stared at the creature descending from the telephone pole. Using its large beak in the same way a caged bird climbs around, it made its way down the pole. When it got to the ground, it flapped its featherless wings. It was at least 8 feet tall, and the light on its head was as bright as an electric bulb. The creature flapped its wings again and hopped up and down.

As it did at the same time every night, the mail train passed through town. The sudden noise seemed to surprise the monster, and it flew away, in the direction of the coal mine. 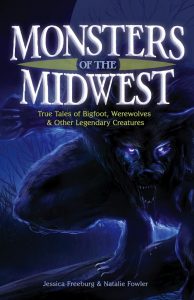 There is, of course, more to this story. Are you brave enough to find out about this monster and the other chilling creatures that have been seen in the Heartland?
In their book Monsters of the Midwest,  paranormal investigators Jessica Freeburg and Natalie Fowler share reportedly true accounts of the strangest, most bizarre sightings of Big Foot, werewolves, and other monsters. Their collection of stories is sure to keep you up at night. Try to remember: That noise you hear… it’s probably just the wind.

About the authors: Jessica Freeburg is the founder of Ghost Stories Ink (a group of authors and illustrators who go on ghost hunts for creative inspiration) and has performed paranormal investigations at a variety of reportedly haunted locations. She has written YA fiction, middle grade narrative nonfiction, and short stories for children and adults. Jessica lives in Lakeville, MN. Natalie Fowler does freelance editorial work and writes her own stories. She is a staff editor for Fate Magazine and is a paranormal investigator for Ghost Stories Ink. Natalie lives in Saint Paul, MN.

This tale is an excerpt from the Van Meter Mystery.