A story by Kailyn Lamb,  the author of the next book in the America’s Haunted Roadtrip Series  Ghosthunting Colorado 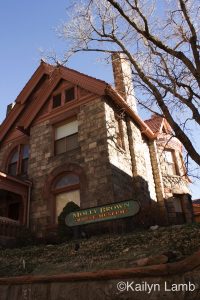 Not all haunted spaces have their stories soaked in gore, violence, and death. The Molly Brown House Museum, which is possibly haunted by its namesake, provides a good example of this.

Margaret “Molly” Brown did many notable things in her life—the most famous of which was surviving the sinking of RMS Titanic in 1912. Arguably one of Colorado’s most beloved celebrities, she left her mark on the Mile High City in many ways. Better known for her unofficial nickname, “The Unsinkable Molly Brown,” she inspired both a musical and later a film starting Debbie Reynolds in the ’60s. According to one of the Molly Brown House Museum’s tour guides, Catherine Trumpis, the fiery and passionate woman never went by Molly in her lifetime, just Margaret or Maggie. Impressions she left on the world go beyond her sense of spirit, her activism, and the tragedy of the Titanic. Her house, now a historic landmark and museum, may hold her ghost as well.

She was born Margaret Tobin in Hannibal, Missouri, in 1867. She would later wed James Joseph “J.J.” Brown in 1886. Margaret was 19 when they were married, and J.J. was 32. They had two children while living in Leadville, Lawrence and Catherine. They purchased the house for $30,000, the equivalent today of about $833,300.

Once the Browns had settled into their new home in Capitol Hill, Margaret started throwing parties to take part in the higher society that Denver offered. Allegedly, J.J. did not approve of these parties and would spend all his time during them in his study smoking cigars.

Although no one has been allowed to smoke in any area of the house for several years, guests of the museum’s daily tours have noticed the odor of cigars, specifically on the second floor where J.J.’s study was. It should also be noted that while J.J. and Margaret’s mother, Johanna Collins Tobin, enjoyed smoking, Margaret herself did not, saying it smoked up the house and that she did not like the smell. In 1910, she converted J.J.’s smoking parlor where he entertained guests into a library. 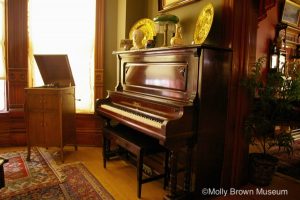 A big reason Margaret was able to convert J.J.’s parlor was because the couple had separated in 1909. The couple never formally divorced due to their religion, but they never reconciled either. After Margaret separated from J.J., she began to travel the world. Aside from her house on Pennsylvania Street in Denver, she had homes in Lakewood, Colorado, and Newport, Rhode Island, and an apartment in New York City. She was in Cairo, Egypt, with her daughter during one of her many trips abroad when she received a telegram from her son, Larry, saying her first grandchild was very ill. She decided to head back to the United States on the first vessel on which she could obtain passage: the Titanic.

Most know the background of the sinking of the Titanic, and some even know Margaret’s role aboard it, as a result of James Cameron’s 1997 film, in which actress Kathy Bates played this chapter’s heroine. When Margaret discovered the chaos above deck while the ship was sinking on April 14, 1912, she immediately took control. She began ushering people onto lifeboats and, according to Trumpis, did not get on one herself until forced by some of the ship’s crewmen.

Some accounts say that as people in the lifeboats watched the Titanic crack and finally sink, several passengers jumped from the sinking ship into the frozen waters below. Where accounts differ is whether or not Margaret had the men rowing her lifeboat go to help those people. While there is no record of whether Margaret was able to save any people in the water, many attribute the “unsinkable” part of her nickname to her brave attempt. Once the ship had sunk and the survivors were picked up by RMS Carpathia, Margaret was put in charge of the survivors’ committee on the trip back to New York. She was picked for several reasons: People were able to relate to her spiritually as a Catholic in their time of grief, and she was fluent in English, German, Russian, and French. Upon her return to New York, reporters asked why she did not sink with the Titanic, and Margaret is reported to have answered, “Hell, I’m unsinkable.” The rest, as they say, is history.

In the Absence of Violence, the Molly Brown House Museum has Acquired the Ghost of a Fiery, Strong Woman

Margaret’s amazing story continues from there. She volunteered as a nurse with the Red Cross in 1917 during World War I, which earned her a French Legion of Honor medal. One of the other notable things that she did in her life was to help create a juvenile court system in Colorado. She also ran for a seat in the senate three times, all before women had the right to vote, and she was one of the first women to do so, with a campaign that promoted domestic rights for women and children. She also acted on the stage in London and Paris. 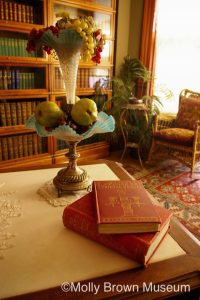 During tours of the Molly Brown House Museum, guests can walk through almost the entire home, with the exception of the third floor, where she used to throw parties. Several of the hauntings, though, actually occur on the second floor of the house, including the aforementioned cigar smoke smell from J.J.’s study. Another common episode involves a rocking chair that sits in what used to be Margaret’s room, which several people claim to have seen rocking back and forth of its own accord. Daily tours take place approximately every 30 minutes during the museum’s operating hours. The museum also hosts special exhibits pertaining to Margaret’s history, as well as special Halloween tours—called Victorian Horrors—and other holiday events. Guests of tours have also claimed to see apparitions that looked exactly like portraits of Margaret that are found throughout the house. One guest even claims that the ghost of Margaret kindly, albeit silently, pointed her in the direction of the bathroom.

There have been independent psychics who have visited the museum who claim that Mrs. Brown’s mother, Johanna Tobin, roams the second floor, that J.J. smokes cigars in the back hallway, and that a maid is dusting the library shelves.

In the absence of violence, the Molly Brown House Museum has acquired the ghost of a fiery, strong woman—and maybe the occasional sign of disapproval from her husband. But her presence does beg the question of what makes her stay. Maybe she feels as if her work of fighting for the rights of others is not yet over. More than likely, of course, we will never know.

About the author: Kailyn Lamb looks at locations throughout the state and dives head first into the history behind the ghosts and what makes them stay.

Join her in investigating the history of some of Colorado’s most haunted locations, and you might find more than gold in those hills.
Order your copy NOW.