Lone Fir Pioneer Cemetery sits between Stark Street to the north and Morrison Street to the south. It is the oldest cemetery in the Portland area and the largest one managed by regional government. It covers more than 30 acres and is home to more than 25,000 gravesites. As a result of negligent maintenance and record keeping over the years, those buried within 10,000 of the sites are unknown. Oftentimes no one documented the paupers when they were interred.

If there was ever a cemetery that was ripe for hauntings, it would be Lone Fir. It has unmarked graves of insane asylum patients, a notorious murderess, graves lost in the shuffle of combining other cemeteries with Lone Fir, and possibly even graves that have not yet been discovered.

The first official burial at Lone Fir was in 1846, when Emmon Stephens was buried on a plot of land that once belonged to his neighbor, a gentleman by the name of Seldon Murray. A decade later, Murray sold Stephens’s gravesite and the adjacent 10 acres to Colburn Barrell with the stipulation that his friend’s grave be tended to. Barrell agreed and kept his word. Not long after this transfer of property, the cemetery was born.

Barrell owned a steamboat on the Willamette River called the Gazelle. In 1856 the Gazelle exploded near Oregon City and killed Barrell’s business partner, Crawford Dobbins, as well as a passenger. The 10 acres that were purchased from Seldon Murray would now be known as Mount Crawford Cemetery, after Barrell’s deceased business partner, who was interred there along with the passenger. 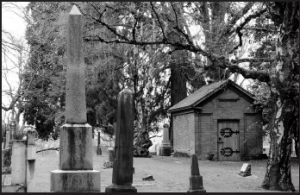 By 1866, Barrell added 20 acres to the cemetery and sold burial plots for $10 each. Later that same year, Barrell realized that the upkeep of a cemetery was more work than he could handle, and he offered to sell Mount Crawford to the city of Portland, which quickly declined. So Barrell sold the cemetery to a group of private investors for a tidy sum of money instead. Those investors immediately renamed the cemetery Lone Fir in honor of the single, lone fir tree that stood at the location.

But the investors had no practical idea of how to maintain a cemetery. Lone Fir fell into a sad state of disrepair. By the late 1920s, the gravesites, thousands of them unknown, were hidden beneath prickly mounds of blackberry vines and other invasive species. A few stone markers were still there, but the majority of the wooden markers had succumbed to rot or one of the many fires that swept through the area.

In 1928, Multnomah County took over control and maintenance of Lone Fir and, in 1947, paved over a large part of the cemetery and built an office on the site. Sadly, the portion paved over was the burial site for many Chinese immigrants; these remains were removed the following year and are said to have been sent back to China. In 2004 more graves were discovered beneath the office site. It was not until 2007 that the office building was removed and more Chinese immigrant remains were found. That same year Lone Fir was added to the National Register of Historic Places.

Today the cemetery is in the capable and caring hands of Friends of Lone Fir Cemetery, which has brought new interest and vitality to it and removed the stigma often associated with such places. This organization has made Lone Fir a fun learning experience for visitors of all ages with tours, concerts to raise funds for headstones that have been vandalized, plays, scavenger hunts, and even Scrabble tournaments. It also runs a family-friendly Halloween event called Graveyard Goodies that it describes as a “trick-or-treating party featuring some of Lone Fir Cemetery’s most prominent ghosts.” The ghosts are actors, and visitors of all ages converse with the prominent residents, doctors, and laborers whose names have been lost or were never known. There is no need to go door-to-door for candy because the “ghosts” hand it out—and they even give autographs.

Anyone who knows a bit about the city’s sordid history will surely recognize a name or two at the cemetery—and even if they do not, chances are they will want to research a few after visiting Lone Fir. People from every walk of life—the famous, the insane, the freed slaves, the leaders in science—can be found at Lone Fir.

A white obelisk honors Dr. James C. Hawthorne, who was in charge of an insane asylum in the 1800s. Dr. Hawthorne genuinely cared for his patients, even when their families had long forgotten about them. Many times a family would not bother to claim the body of the deceased, so Dr. Hawthorne buried more than 130 of his patients at Lone Fir at his own expense. It is not known exactly where the former patients are buried, but it is speculated that they were interred in what is called Block 14 in the southwest corner of the cemetery. Block 14 is also the site of unmarked graves of numerous Chinese railroad workers.

Another notable resident of Lone Fir is Charity Lamb, who murdered her husband in 1854. Nathaniel Lamb sat at the dinner table as he usually did, entertaining his children with animated stories, when Charity quietly stepped up behind him and brought an ax down against the back of his head. Twice. Even more amazing is that Nathaniel lived for two weeks before he gave up the ghost and succumbed to the ax wounds. Charity Lamb was the first woman to be convicted of murder in the Oregon Territory. She did not receive the death penalty but was instead sentenced to a lifetime of hard labor at the Oregon State Penitentiary in 1854. A decade later, she was transferred to Dr. Hawthorne’s insane asylum, where she died in 1879. And so she ended up near Dr. Hawthorne in life and in death.

Not much is known about Michael Mitchell, a dancer in Portland who froze to death on the steps of his boardinghouse. Some say he was intoxicated and not allowed inside while under the influence. But what a shock it must have been for other boarders to emerge from the house the next morning to find him frozen and stiff on the front stoop!

Not long ago, a gentleman and his friend decided to check out Lone Fir after dark. Walking along the roadside, the pair explored the cemetery, looking at names on the headstones, when one man looked up and saw a figure standing about 50 yards away from them. He called out to the figure but received no response. His first thought was that someone had seen them and was trying to frighten them. So they walked toward the figure, playing along with the spooky prank.

As they approached, the figure seemed to jerk its head upward to the sky, just staring, and they realized that they might not be dealing with a joke after all. The figure was obscured by the trees, but as they cautiously moved closer, they could make out the face of an elderly man with a long beard, wearing a white shirt and black pants. They shouted hello, and in response, the man violently jerked his head toward them, opened his mouth, and screamed. The men say the figure’s eyes were blank as it continued to stare at them before letting go with another loud scream. After seeing the man’s weird eyes and hearing the second scream, the two of them left the cemetery in a hurry and have never been back.

No one else I spoke with reported anything nearly so frightening, and most described seeing misty figures walking across the cemetery during the daytime as well as after dark. Visitors repeatedly see a younger woman in a red dress who seems to be happily strolling through the grounds, oblivious to anyone around her. 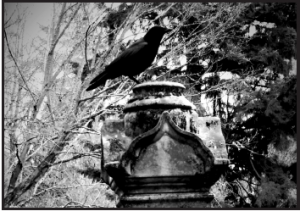 My visit to Lone Fir was during the daytime and, due to rain, not as long as I would have liked. Unfortunately, I did not spot the woman in the red dress or the zombie-like specter that the men saw. Occasionally I felt as though I was being watched, but not to the point that it caused me any concern or fear. After all, I was a guest in the home of those who are buried there, and I expected to be watched.

Lone Fir Pioneer Cemetery is beautiful, even in the rain. The stately obelisks and headstones with photographs are almost breathtaking. You can feel a connection with some who are interred there because many headstones contain more information than any I have ever seen.

One in particular that I was fascinated with was the headstone for James B. and Elizabeth Stephens, who were early pioneers in the area. James B. Stephens’s father was Emmon Stephens, the first man buried on the property.

Theirs is not your normal headstone. The images of Mr. and Mrs. Stephens are carved into the headstone in a realistic style. On the back of the marker is a stone that, to me, was touching.

“Here we lie by consent after 57 years, two months, two days sojourning on earth awaiting nature’s immutable laws to return us to the elements of which we were formed,” the inscription reads.

You can’t pass up the Soldier’s Monument, which memorializes the Indian Wars, Mexican-American War, American Civil War, and Spanish-American War. It was constructed in 1903 with $3,500 in community donations and is a beautiful, stately memorial that stands strong and proud to this day.

When people ask me if Lone Fir Pioneer Cemetery is haunted, I have to answer, “How could it not be?” With its tragedies and thousands of forgotten graves, lost ghosts likely wander the cemetery. And whether visitors want to participate in an event or hope to catch a glimpse of a ghost, they will leave with a new knowledge of the people who were essential in making Portland the city it is today, so it is definitely worth a trip. When you find yourself in Portland, you can stop by and judge for yourself.