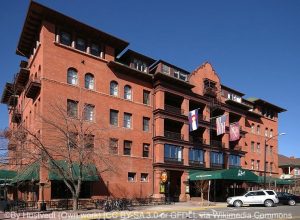 When the hotel originally opened, Boulder was a dry county and would be until 1967, when the ban on liquor was repealed. Two years later, the hotel had remodeled its basement to open the Catacomb Bar (now called License No. 1). It was the first organization in the city to obtain a liquor license after the law was repealed.

Like many old hotels, the Boulderado is thought to be home to a number of spirits of a different kind, and many staff members have had paranormal experiences in the building. Many of the stories center around rooms 302 and 304, which are next to each other. When guests complain to the front desk about haunted activity, these rooms are the culprits most of the time.

The rooms have a connecting door that makes them a popular option for some guests, and room 302 has a porch, again making it a desirable room. Many haunted-tour guides and employees think that paranormal activity in this particular room is caused by an attempted double suicide (although I have not seen any record of this story). According to the story, a man killed himself on the bed using chloroform while his wife was taking a bath. When the woman entered the room and found her husband dead, she attempted to take the rest of the chloroform herself, but there was not enough left for a fatal dose. There are also some who say the room has hosted “multiple suicides” over the years, another one supposedly being a death by self-inflicted gunshot, but this tale is not as widely told as the one of the chloroform suicide.

Reports of activity in the adjoining suites claim that the lights and televisions will turn on by themselves. The old grandfather clock in the room has also been known to act strangely from time to time, and it will wildly spin its hands before landing on the correct time. According to the Boulder County Paranormal Research Society, a staff member was taking an American Indian guest to room 304, the only room available that night, and that visitor would not even touch the door. That person claimed to feel a spiritual presence in the room and left to stay at a different hotel, even though it was very early in the morning.

Because of all this, the hotel has been known to keep the rooms open to the public on occasion for ghost tours. One of the other spirits believed to cause activity in the building is a woman in a white dress who has been seen walking around the hotel’s hallways. Kitchen items have been known to move around for no reason. Sometimes windows and doors will open on their own, despite being locked. One staff member said that while staying in room 306, he woke feeling like something was holding him to the bed so that he could not get up. There are also unexplained scratching sounds on the walls.

Boulder has long attracted visitors looking for a mountain getaway in Colorado. The city lies at the foot of the Rocky Mountains, is a short drive from several skiing hot spots, and is right in the middle of a drive from Denver to Estes Park. Paranormal enthusiasts looking to hit as many haunted locations as possible (and still make it to the Stanley Hotel) can use this as an in-between location for their route.